For the next 12 months the hall’s longstanding portrait gallery of all-male luminaries (including William Tyndale and John Donne) will be replaced by a photographic collection of female fellows and alumni. The new portraits feature women from all professions and walks of life, ranging from the philosopher Baroness Warnock to world champion rower Stephanie Cullen, Professor of Anatomy Kay Davies DBE and curator Xanthe Brooke.

Hertford is one of five Oxford colleges that went fully coeducational (both teaching and housing female students in college) in 1974 – the first at the University to do so. Dr Emma Smith, Fellow and Lecturer in English, coordinated the year-long project. She says: ‘Marking the coeducation anniversary gave us the opportunity to make a big statement not only about the importance of women to Hertford's successes since 1974, but about the range of careers and lives our students – both women and men – go into.

‘It's not just that our previous portraits were all of men, but more that they represented a narrow definition of achievement, and a very hierarchical one. Our new portraits show that we are as proud of unsung achievement and of potential as we are of high office or salary.’

The gallery unveiled on 20 September includes women from every decade of co-education. Some were nominated by colleagues or peers, others chosen because their personal stories drew on their experience of the college itself in different ways.

Hertford College Principal Will Hutton says: ‘For centuries the gender of the portraits in Hertford's hall had been 100 per cent male. On top of that, colleges like ours only admitted men as undergraduates until forty years ago, which still strikes me as amazingly close to today. We were one of the five male undergraduate colleges first to admit women in 1974 and break this all male preserve, and it seemed fitting for this year of all years to give the hall's portraits over to Hertford women to celebrate the anniversary. It hardly corrects the role of hall over the years as a bastion of male portraiture, but it is a signal of our future intent.’ 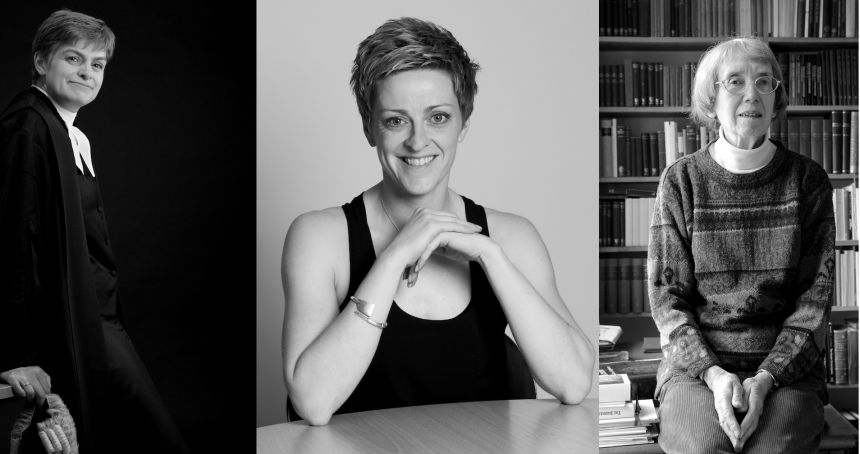 The portraits were taken by photographer Robert Taylor. He says: ‘Too often, even in the twenty-first century, women are still much more prone than men to judgments and assessments based on superficial and largely irrelevant aspects of their physical appearance and sartorial choices. I combined the portraits with the sitters’ personal written reflections with the intention of celebrating the presence, character and talent of a collection of confident and intriguing women.’