The Duke of Cambridge has formally opened the Dickson Poon University of Oxford China Centre Building in the grounds of St Hugh’s College. The University of Oxford has been regarded as Europe’s leading centre for the study of China for some time. The Centre now has a dedicated building bringing its academics with an interest in China under the same roof.

The Duchess of Cambridge had been due to accompany her husband to Oxford. However, it was announced on the day of the opening that she is pregnant with her second child. Kensington Palace said she is suffering from acute morning sickness and so would be unable to attend.

The Duke officially opened the China Centre building by joining others in a traditional Chinese ribbon-cutting ceremony in its courtyard garden. He said: 'The China Centre is an enormous achievement. It stands on the foundations of many centuries of learning in the University of Oxford about China, and it marks a significant leap forward. The strength and creativity of the partnership between the University and St Hugh's provides a solid foundation for the creation of what has the potential to become the foremost place of study about China in the world.'

He added: 'Learning from and learning about China has never been more important than it is now. China is one of the world's oldest civilisations. Its long history, customs and artistic and technological ingenuity have endured as a source of fascination and wonder in the world. The globalised world that we inhabit and that we have both helped forge, underscores the importance of deepening our knowledge and appreciation of one another. In an ever turbulent and changing world, the dialogue that academia can foster is not merely a nice-to-have it is a pillar that supports peace and prosperity.' 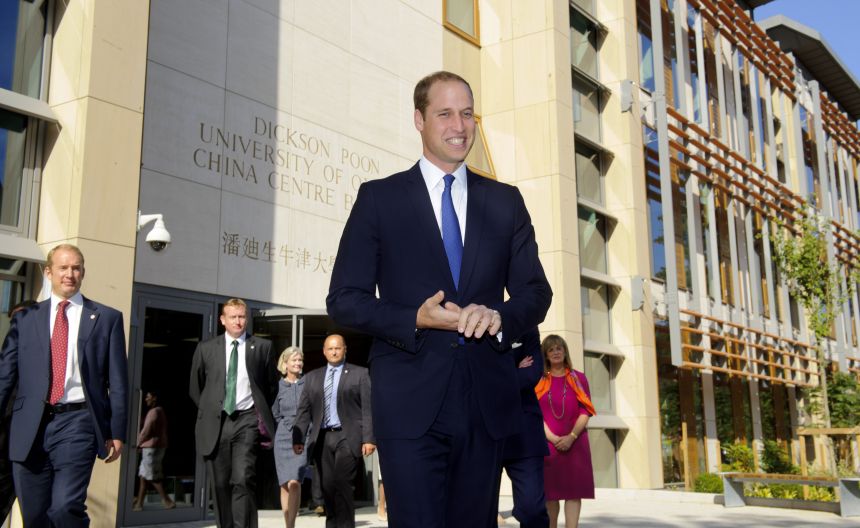 The Duke of Cambridge opened the new China Centre

The Duke was met by members of staff, students and friends of St Hugh's College before being taken on a tour of the new £21m China Centre. He was also introduced to major donors including Hong Kong philanthropist, Mr Dickson Poon CBE.

Mr Poon, who contributed £10m to the new building, explained why he felt Oxford was the right place in the West for a new dedicated centre of scholarship on China.

Mr Poon said: 'I believe China will become an even more significant world force this century, requiring a deeper understanding by the West. Oxford already has a proud history in the study of China, and I was delighted to make this gift to help advance knowledge, collaboration and understanding in all aspects of Chinese culture.'

His Excellency Ambassador Liu Xiaoming, from the Chinese Embassy in the UK, also attended the event. Speaking at the ceremony, he said: ' I look forward to the China Centre of Oxford University making great contributions to strengthening China-UK cultural and academic exchanges and becoming a powerful new force for promoting stronger and better understanding and friendship between the people of our two countries.'

The new building has floor space of nearly 5,500 square metres (excluding the Chinese central courtyard and garden) over five floors. Its dedicated library and a reading room will provide a permanent home for 60,000 volumes and a significant part of the Bodleian Libraries' Chinese book collection. It also features a 100-seater lecture theatre; a dining room, study areas, a state-of-the-art language laboratory; and a green, ecologically efficient roof terrace. There are 63 study/bedrooms for students of St Hugh’s College in the same building, as well as a range of conference and seminar facilities. 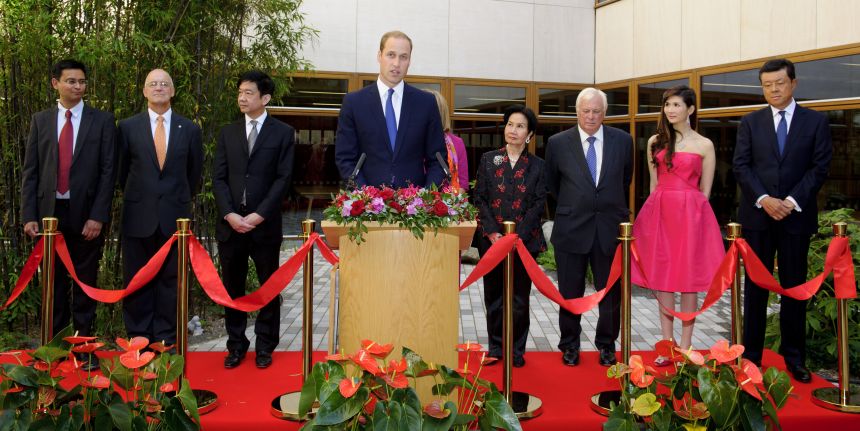 The Duke was shown the Selden Map of China, a special treasure from the Selden collection at the Bodleian Libraries. It is the earliest map to show shipping routes linking Ming-era China to markets in South Asia and beyond and, for the first time, depicts China as part of a greater East and Southeast Asia. The colourful map underwent major conservation work in 2008 and was exhibited in China earlier this year.

The Chancellor of the University of Oxford, Lord Patten, said: 'We are delighted that the Duke formally opened Oxford's new dedicated China Centre. The first Chinese book arrived at the University's Bodleian Library in 1604 so Oxford has a long tradition of scholarship about China. As China's role in the world expands, Oxford is positioned as one of the top centres in the world to study this fascinating process. The dedicated building is yet another milestone, further sharpening Oxford’s focus on China.'

The University Vice-Chancellor, Professor Andrew Hamilton, said: 'Oxford has nearly 50 permanent academics working on the politics, economics, history, literature and society of China from ancient times to the present day. We are delighted that the generosity of the donors has enabled this rich concentration of talent to come together in the Dickson Poon University of Oxford China Centre. The Centre will draw together experts from across this University, as well as international China specialists and institutions involved with China.'

Dame Elish Angiolini QC, Principal of St Hugh's College, said: 'This has been a unique collaboration between a college of the University and University departments. St Hugh's is extremely proud to have raised £20 million for this new development, and we are confident that through continued fundraising we will soon have the total amount needed. We are immensely grateful to our donors for helping us to provide such attractive, modern facilities for the students, Fellows and wider community at St Hugh's.'

Professor Rana Mitter, Director of the China Centre, said: 'The opening of the magnificent new China Centre building enables us to confirm Oxford's position as Europe's premier centre for the study of China and to move toward making it the most exciting place to work on China in the western world.'