The gene mutations driving cancer have been tracked for the first time in patients back to a distinct set of cells at the root of cancer – cancer stem cells.

The international research team, led by scientists at the University of Oxford and the Karolinska Institutet in Sweden, studied a group of patients with myelodysplastic syndromes – a malignant blood condition which frequently develops into acute myeloid leukaemia.

The researchers say their findings, reported in the journal Cancer Cell, offer conclusive evidence for the existence of cancer stem cells.

'It's like having dandelions in your lawn. You can pull out as many as you want, but if you don't get the roots they’ll come back,' explains first author Dr Petter Woll of the MRC Weatherall Institute for Molecular Medicine at the University of Oxford. 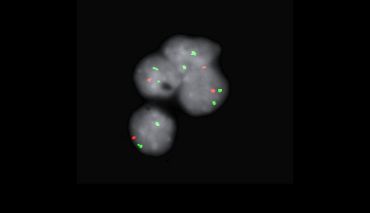 Cancer stem cells in myelodysplastic syndrome
Fluorescence image of MDS stem cells in which orange shows an area of chromosome 5 has been lost from the cell. Credit: Petter Woll/Oxford University

The researchers, led by Professor Sten Eirik W Jacobsen at the MRC Molecular Haematology Unit and the Weatherall Institute for Molecular Medicine at the University of Oxford, investigated malignant cells in the bone marrow of patients with myelodysplastic syndrome (MDS) and followed them over time.

Using genetic tools to establish in which cells cancer-driving mutations originated and then propagated into other cancer cells, they demonstrated that a distinct and rare subset of MDS cells showed all the hallmarks of cancer stem cells, and that no other malignant MDS cells were able to propagate the tumour.

The MDS stem cells were rare, sat at the top of a hierarchy of MDS cells, could sustain themselves, replenish the other MDS cells, and were the origin of all stable DNA changes and mutations that drove the progression of the disease.

'This is conclusive evidence for the existence of cancer stem cells in myelodysplastic syndromes,' says Dr Woll. 'We have identified a subset of cancer cells, shown that these rare cells are invariably the cells in which the cancer originates, and also are the only cancer-propagating cells in the patients. It is a vitally important step because it suggests that if you want to cure patients, you would need to target and remove these cells at the root of the cancer – but that would be sufficient, that would do it.'

The existence of cancer stem cells has already been reported in a number of human cancers, explains Professor Jacobsen, but previous findings have remained controversial since the lab tests used to establish the identity of cancer stem cells have been shown to be unreliable and, in any case, do not reflect the "real situation" in an intact tumour in a patient.

'In our studies we avoided the problem of unreliable lab tests by tracking the origin and development of cancer-driving mutations in MDS patients,' says Professor Jacobsen, who also holds a guest professorship at the Karolinska Institutet.

It's like having dandelions in your lawn. You can pull out as many as you want, but if you don't get the roots they’ll come back

Dr Woll adds: 'We can’t offer patients today new treatments with this knowledge. What it does is give us a target for development of more efficient and cancer stem cell specific therapies to eliminate the cancer.

Dr Woll cautions: 'It is important to emphasize that our studies only investigated cancer stem cells in MDS, and that the identity, number and function of stem cells in other cancers are likely to differ from that of MDS.'

The study was funded by the Leukemia and Lymphoma Society, Leukaemia and Lymphoma Research, the Knut and Alice Wallenberg Foundation and the National Institute for Health Research (NIHR) Oxford Biomedical Research Centre (BRC).