Oxford University researchers have identified an area of the human brain that appears unlike anything in the brains of some of our closest relatives.

The brain area pinpointed is known to be intimately involved in some of the most advanced planning and decision-making processes that we think of as being especially human.

'We tend to think that being able to plan into the future, be flexible in our approach and learn from others are things that are particularly impressive about humans,' says senior researcher Professor Matthew Rushworth of Oxford University's Department of Experimental Psychology. 'We've identified an area of the brain that appears to be uniquely human and is likely to have something to do with these cognitive powers.'

MRI imaging of 25 adult volunteers was used to identify key components in the an area of the human brain called the ventrolateral frontal cortex. The study also investigated how these components were connected up with other brain areas. The results were then compared with equivalent MRI data from 25 macaque monkeys. 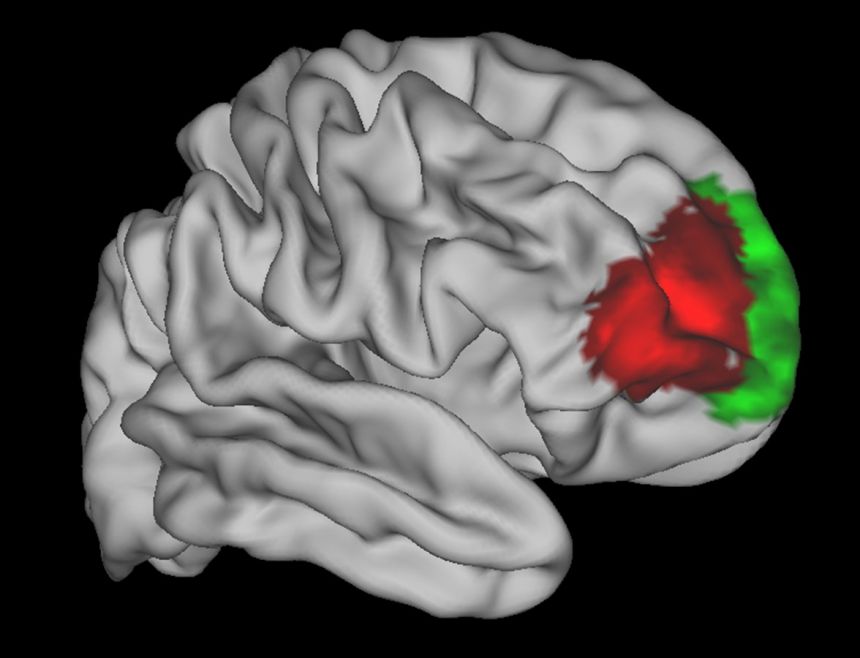 MRI image of the human brain showing (in red) an area that appears to be uniquely human.
Credit: University of Oxford.

The ventrolateral frontal cortex area of the brain is involved in many of the highest aspects of cognition and language, and is only present in humans and other primates. Some parts are implicated in psychiatric conditions like ADHD, drug addiction or compulsive behaviour disorders. Language is affected when other parts are damaged after stroke or neurodegenerative disease.

The Oxford University researchers report their findings in the science journal Neuron. They were funded by the UK Medical Research Council.

Professor Rushworth explains: 'The brain is a mosaic of interlinked areas. We wanted to look at this very important region of the frontal part of the brain and see how many tiles there are and where they are placed.

'We also looked at the connections of each tile – how they are wired up to the rest of the brain – as it is these connections that determine the information that can reach that component part and the influence that part can have on other brain regions.'

From the MRI data, the researchers were able to divide the human ventrolateral frontal cortex into 12 areas that were consistent across all the individuals.

'Each of these 12 areas has its own pattern of connections with the rest of the brain, a sort of "neural fingerprint", telling us it is doing something unique,' says Professor Rushworth.

The researchers were then able to compare the 12 areas in the human brain region with the organisation of the monkey prefrontal cortex.

Overall they were very similar, with 11 of the 12 areas being found in both species and being connected up to other brain areas in very similar ways.

'We have established an area in human frontal cortex which does not seem to have an equivalent in the monkey at all,' says first author Franz-Xaver Neubert of Oxford University. 'This area has been identified with strategic planning and decision making as well as "multi-tasking".'

The Oxford research group also found that the auditory parts of the brain were very well connected with the human prefrontal cortex, but much less so in the macaque. The researchers suggest this may be critical for our ability to understand and generate speech.