One of the most devastating legacies of the pandemic has been its impact upon the creative and performing arts. It is a challenge readily acknowledged by Oxford’s new Head of Humanities, Professor Daniel Grimley, as he steps into the role following Karen O’Brien’s departure to take up the vice-chancellorship at Durham University.

Professor Grimley claims he is a ‘really bad violinist’, a ‘poor composer’ and has a ‘terrible singing voice’, but he is not afraid to be a strong advocate for the arts and humanities in the post-pandemic world. And, with his passion for teaching, education, and research, he is thrilled to be leading the division at such an exciting moment in its history.

Professor Grimley claims he is a ‘really bad violinist’, a ‘poor composer’ and has a ‘terrible singing voice’

Professor Grimley’s enthusiasm bubbles over as he talks about progress on the new Stephen A. Schwarzman Centre for the Humanities, which will bring together seven of the division’s faculties and departments into the same building for the first time. Clustered around a series of world-class creative spaces including a purpose-built concert hall and an experimental performance lab, Professor Grimley describes the centre as a ‘transformational landmark gift’, and talks excitedly about the ‘interdisciplinary sparks’ which will result.

‘It will be critical and creative’ he says. ‘It will challenge boundaries and encourage new forms of performance and research.’ 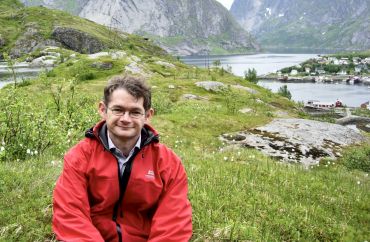 In the landscape: a younger Professor Grimley in Scandinavia.

The centre will open in 2025 and has been planned carefully to foster intensive creative and academic exchange with broad public engagement. In the meantime, however, Professor Grimley has a very full in-tray, supporting students and colleagues, and addressing an array of demanding issues from research funding and open access to calls for decolonisation of the curriculum.  He is certainly not in for a quiet time, so why has Professor Grimley put himself in the firing line?

‘As with the other divisions,’ he says passionately. ‘We have a responsibility to lead discussion and debate...the Arts and Humanities at Oxford are a cultural powerhouse, ready to resurface after Covid. The Humanities make the world worth living.’

‘Such discussions cannot take place in a vacuum,’ he says. ‘We really want to push the envelope with Humanities.

‘We need to look at climate change through a historical lens and understand environmental processes in all their cultural dimensions.’

And, he says firmly, ‘We have to deliver on the curriculum. We have been through a really dynamic two years and we need to show we are listening and be prepared to change.’

Professor Grimley emphasises this is a positive move, which will not undermine the strengths of Oxford Humanities – but enhance them. This does not need to be an antagonistic or oppositional process, he says, it is about ‘openness, respect, and transparency’.

Music has always been political...Within his own field of Scandinavian music, the legacies of nationalism have often cast a dark shadow

His commitment comes from a personally formative experience, he explains, after working closely with colleagues in South Africa. Thinking about landscape, music and environment in a South African context, he says, ‘made me think much more intensively about long colonial legacies and about who is speaking from which platform’.

Music has always been political, the musicologist explains. Within his own field of Scandinavian music, the legacies of nationalism have often cast a dark shadow. And in his recent book on the English composer Frederick Delius, who was sent to oversee his family’s citrus farm in Florida and later claimed to have been influenced by the music of African-American plantation workers, Professor Grimley has tried to address the entangled issues of race, political justice, and musical representation.

In his recent book on the English composer Frederick Delius, who...claimed to have been influenced by the music of African-American plantation workers, Professor Grimley has tried to address the entangled issues of race, political justice, and musical representation.

Such questions can be uncomfortable, Professor Grimley admits, but that does not mean they should be avoided.

‘It’s about approaching them in their wider historical context, as with Delius’s music,’ he maintains. ‘And it’s about supporting others, working with students and colleagues and enabling and empowering people.’

Professor Grimley is keen to encourage those from a non-traditional background, and admits to having felt ‘imposter syndrome’ himself. After going to a comprehensive school in East Kent, he won a place to study music at King’s College, Cambridge.

‘I was lucky: I had a brilliant music teacher at school, a man called Cyril Wade,’ he says. ‘It was life-changing, [going to Cambridge], but I had a feeling of being completely out of my depth...there was a golden music generation at Cambridge at that time [in which he does not include himself] … and hearing people of my age, who could already play and sing at a professional level, was absolutely mind blowing.’

Although Cambridge was a new horizon, the young Daniel had come from a very musical family. He says, ‘My parents and their friends played Talking Heads, Flora Purim, and Miles Davis, as well as classical music.’

And, as a boy, he developed eclectic musical tastes, from Bowie to Beethoven. But it was Scandinavian music that really captured his heart – long before the fashion for Scandi Noir.

‘I was fascinated by Sibelius as well as Ibsen, Munch and Strindberg. They have always been at the core of my research. I don’t know how anyone can listen to the end of Sibelius’s 5th symphony and not be moved.’

Encountering such different kinds of music was a formative experience, he explains, and one of the reasons why he chose to study music at university and eventually pursue a research career. For anyone questioning why musical research and study is vital, Professor Grimley is emphatic, ‘Music is so complex, rich, diverse and global. It is a fundamental part of the human experience.’

‘It is about processing large amounts of complex, abstract non-linguistic data, developing high-level communication skills and listening intensively – those are key tools, which underpin many disciplines.

‘And that is before you even think about creativity...a music degree is hard and demanding, but it’s so rewarding.’

Professor Grimley feels fortunate. He recently published a new biography of Sibelius, and has been engaged in departmental and divisional leadership for some years. It means a lot of paperwork, and less teaching than he would like, but he recognises the importance of championing the Humanities.

‘There’s a continuing challenge...but I am fascinated by other people’s work and I understand the pressures involved. I want to support them in every way I can.’