Professor Sir Charles Godfray, the director of the Oxford Martin School, 'It’s wonderful job to have. We support ambitious projects that have to have a plausible pathway to making a real difference: this was the mission we were given by our wonderful founder, James Martin.'

From the age of 10, Professor Sir Charles Godfray knew he wanted to study the world around him. He lived on the edge of the Bristol Downs, which offered a nature reserve on his doorstep. And, like generations of others, he was inspired by David Attenborough, who was even then making nature programmes (the now rather un-PC Zoo Quest, in which the presenter would accompany zoo staff on missions to capture animals).

Professor Godfray jokes that his whole career has been an excuse to be a natural historian and he has only ‘accidentally’ found himself a senior academic. And what an accident, or series of accidents, there have been. Currently, Director of the Oxford Martin School, and Professor of Population Biology, Sir Charles is a regular visitor to the corridors of power and, in 2017, he was knighted for his contributions to science and science-advice to government.

Professor Godfray jokes that his whole career has been an excuse to be a natural historian and he has only ‘accidentally’ found himself a senior academic. And what an accident, or series of accidents, there have been

The self-effacing and good-humoured Professor Godfray looks perplexed at this turn of events. But spend time in his company and it can be no wonder. A population biologist, specialising in mathematical modelling of population dynamics, Professor Godfray is interested in genetics and ecology as well as ideas and action. And he unselfconsciously hops from 18th century economic theory, to future environmental policy options in relation to food, to research on insects (of which more later).

It was not supposed to be like this. The young Charles had (briefly) intended to study medicine, but meeting a disappointed amateur naturalist convinced him that he should not miss the chance to study the natural world.

‘He was a sweet man...who collected butterflies. He had been in the army, but said he had always wished he had studied Biology. I made the decision that, even if a degree in Biology led nowhere, I did not want to regret never having given it a go.’

And so, he applied and won a place at Oxford to study Zoology. He would have preferred to study Biology but, he says, in those days, you had to choose either animals or plants. At that time, he says, Oxford Zoology was a very exciting place with, for example, John Krebs and Richard Dawkins rethinking large parts of evolutionary biology. It left him with an abiding interest in evolution.

He unselfconsciously hops from 18th century economic theory, to future environmental policy options in relation to food, to research on insects (of which more later)

His interest was also captured by the topic of population dynamics: why do some populations persist in the field; why do others show regular cycles.  Imperial College was the leading British centre for research in population dynamics, and he moved there to do his doctorate. Apart from two years back in Oxford as a temporary lecturer, he was to spend the next 25 years at Imperial.

‘Imperial College is a wonderful institution,’ he says with fondness. ‘And there is a great tradition of people shuttling between Oxford and Imperial.’

While at Imperial he was influenced by some of the leading ecologists of the day, including Mike Hassell, John Lawton and Bob May (later Lord May of Oxford), all researching different aspects of population dynamics.

‘Just as major advances in evolution were being made at Oxford, similar advances were happening in ecology at Imperial,’ he says. ‘I was hugely lucky to experience both.’

After finishing his PhD, the then Dr Godfray was given an opportunity to go on secondment to the Food and Agriculture Organisation of UN – in the field in South East Asia.

‘It was an applied project,’ he says of his foray into the Attenborough domain. ‘How do we control a couple of introduced insect pests of coconut in the Philippines?

‘The idea was to collect parasitic wasps and the specific pathogens of the pests (from Fiji and Malaysia) and then release them back in the Philippines – a biological rather than a chemical control method.’

As is often the case, he says, thinking about applied problems prompts questions about fundamental science.

‘My first paper in Nature was on the population dynamics of tropical insects stimulated by observations of coconut insects in South-east Asia.’

Professor Godfray’s group is [involved in a project] which could help reduce malaria. The idea is to control the mosquitoes...by releasing some with a ‘selfish gene’...reducing their fitness and potentially leading to local extinction....  Isn’t this like the plot of a sci-fi film that goes horribly wrong?

This interest in insects has led him into a fascinating area of research – with more than a touch of the sci-fi about it.

Professor Godfray’s group is responsible for the mathematical modelling on a project, backed by the Gates Foundation and led by his colleague Austin Burt at Imperial, which could help reduce malaria. The idea is to control the mosquitoes that transmit malaria by releasing some with a ‘selfish gene’, which will spread naturally through the population reducing their fitness and potentially leading to local extinction.

‘I particularly like this project as it links all my interests: insects, fundamental and applied science, evolutionary ecology and epidemiology!’ 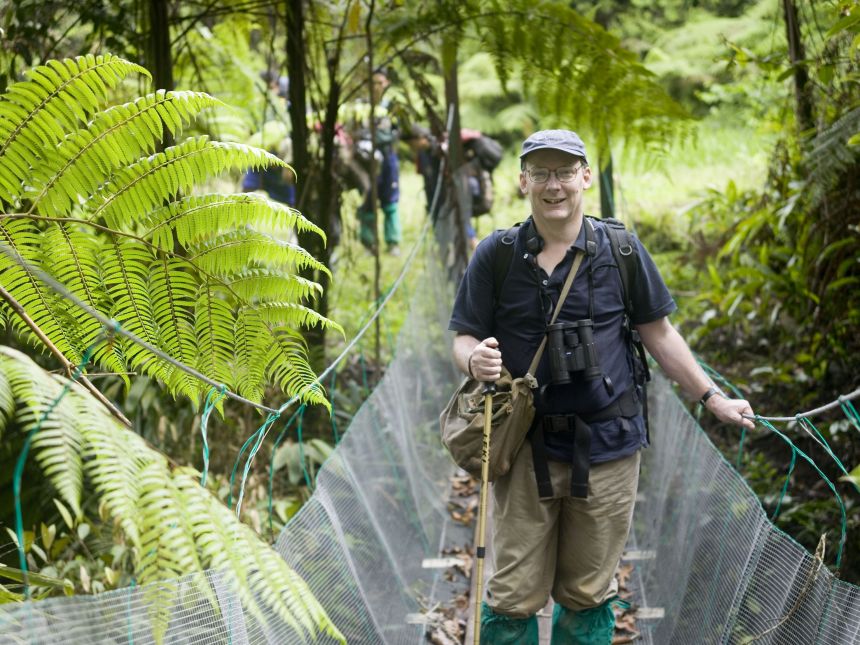 After finishing his PhD, he had an opportunity to go into the Attenborough domain, in the field in South East Asia. Pictured here in Sabah, Malaysian Borneo.

Isn’t this like the plot of a sci-fi film that goes horribly wrong? (Are there any bats involved?)

‘If I weren’t 100% certain it was safe, I wouldn’t be involved,’ he says. ‘But all of us on the project stress that it shouldn’t be us who decide whether it is safe or not, but independent regulators, especially those in countries affected by malaria where the releases will take place.’

Insects, ecology and evolution remain a great interest, but he has taken other paths, away from the forests and into the ‘jungles’ of science policy.

‘I never really planned my career, but just followed what I found interesting,’ he says. ‘In recent years this has increasingly involved science advice to policy makers.’

His first foray into this world was 20 years ago when Defra asked him to chair a committee looking at a large bovine TB control programme.

‘It was fascinating,’ he says. But why him?

‘I think they needed someone who was comfortable with a lot of different science, who could be a generalist, as well as a specialist,’ suggests Professor Godfray.

This role was to lead to other work for government including chairing Defra’s Science Advisory Council.  Recently, he was asked to return to bovine TB, chairing a review of the UK’s strategy to control this disease.

But back in 2006, after two decades in London, he returned to Oxford, and was made Hope Professor of Entomology.  In addition to mosquitoes, his group worked on aphids and the complex zoo of bacterial symbionts they contain.

‘Aphids are curious in that they have a depleted immune system and seem to outsource defence against disease to their symbionts,’ he explains. ‘For example, we found that aphids could survive a normally lethal fungal infection if they carried the right bug.’

Soon after his Oxford return, he was asked to chair a Government Office of Science Foresight project, looking at another new area for him: the future of food and farming.  He led a team of people tasked with outlining the major science and policy challenges in this area and how they might be addressed.’

‘It was a dream team of people to work with,’ he says, ‘And absolutely fascinating’.

Their report was published in 2011, an opportune time as food price volatility was very high and food had rocketed up the policy agenda.

It was not to be short-lived diversion. He admits, ‘I rather thought that I’d stop working on food after the report came out but I was approached by the Oxford Martin School to lead a programme on the Future of Food – bringing together research in Oxford on all aspects of food.’

There are enormous challenges to feeding the growing world population...But overall, I’m an optimist. In fact, I’m more an optimist now than when I was a student....We can envisage a time when humanity’s demands on the planet cease to grow – there’s everything to play for

The programme has led to further projects, in particular a large interdisciplinary programme supported by the Wellcome Trust on Livestock, Environment and People (LEAP).

‘There are enormous challenges to feeding the growing world population,’ he says. ‘But overall, I’m an optimist. In fact, I’m more an optimist now than when I was a student.’

He explains that, until recently, there was not an intellectual argument to counter the assertion of Thomas Malthus, the 18th century Cassandra of political economy, that human population growth will inevitably outstrip our capacity to feed everyone.

But we now know, he says, that if we bring people out of poverty, educate their children, and provide access to reproductive healthcare, human fertility naturally decreases.

‘We can envisage a time when humanity’s demands on the planet cease to grow – there’s everything to play for!’

There are hard decisions ahead, including the need for diet change – for example eating less meat and dairy. It is a hard-sell to a world devoted to burgers and barbeques.  ‘We can all make personal choices about the food we eat,’ he says. ‘But we also need our politicians to make brave decisions about how we shape our food system

‘The challenges are both complex and simple,’ he smiles. ‘We need action on all fronts: innovation to produce more food with fewer negative effects on the environment, a transition to more healthy and sustainably diets, cutting out food waste, and more effective food governance’

With a touch of ‘Yes Minister-style’ caution and a dash of humour, he adds, ‘Or it could go terribly wrong.’

Professor Godfray may insist that he is a natural historian ‘only pretending to be an academic’, but he has not escaped entirely unscathed from decades in higher education and years as a government adviser.

And this has led Professor Godfray to his current ‘academic home’, with a view from his office window into the heart of Oxford – as the director of the Oxford Martin School. The research institute pursues answers to the most pressing global challenges and opportunities of the 21st century.

‘It’s wonderful job to have,’ he says with excitement. ‘We support ambitious projects that have to have a plausible pathway to making a real difference: this was the mission we were given by our wonderful founder, James Martin.’

It is an ambitious research agenda, with a determination to make a difference – and an appetite to take risks. He laughs, ‘We don’t mind heroic failures but we don’t want any dismal failures’.

When I’ve had a tiring day, I treat myself to an evening looking at these wonderful little insects [wasps] through a microscope

He still finds great relaxation, however, in natural history, both generally and in a group of tiny wasps of which he is an expert.

‘They are so under-studied that I get specimens sent to me to identify from all over Europe.’

‘When I’ve had a tiring day,’ says Professor Godfray, smiling with anticipation. ‘I treat myself to an evening looking at these wonderful little insects through a microscope.’