Professor Richard White is a physician-scientist who trained in medical oncology and cancer genetics.

While his clinical training gave him important insights into patient care, interests over time have shifted to more basic mechanisms of cancer biology. During Professor White’s postdoctoral training, he became interested in the zebrafish as a model, since it has a unique set of genetic and imaging tools to interrogate cancer.

To better understand each step in tumour progression, Professor White developed a transparent strain of zebrafish called casper which has greatly facilitated imaging. One advantage of using the zebrafish is that it allows the research group to study tumour development in an intact microenvironment, with all the various cells that contribute to the tumour ecosystem. Work has centred on understanding how cancer cells co-opt and use programmes commonly deployed during embryonic development.

Professor White’s research group has made fundamental discoveries about how neural crest programmes in melanoma affect response to oncogenes, how the anatomic position of the cell determines which oncogenes the cell responds to, and how microenvironmental cells such as adipocytes can promote metastasis.

Professor White believes that a deeper understanding of basic cancer biology is central to eventual translation to the clinic, and supports trainees who are driven by curiosity-based research.

Professor Richard White's media experience includes numerous interviews given to the American press with media outlets such as National Public Radio, the New York Times and the Boston Globe. 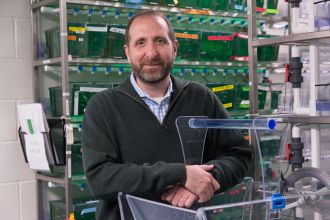