The APGRD is conducting pioneering research into the drama and poetry of the ancient world, bringing it to new audiences, and working with contemporary performance artists inspired by antiquity. 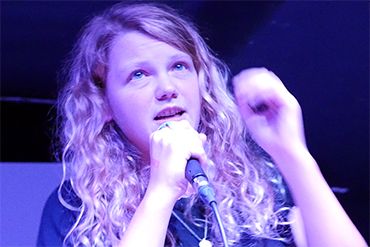 Kae Tempest at the Shapeshifters event at Modern Art Oxford in October 2014.

The APGRD, based at Oxford University, is a vibrant international Research Centre investigating the performance of Greek and Roman drama and epic.

The Centre curates an extensive collection of manuscripts and artefacts, and has built a record of pioneering research which includes over 20 books (since 2000) on topics ranging from music to dance to how performances have been staged and received by audiences.

But the Centre’s vision has always extended beyond pure academic research. It sees engaging with, and creating alongside, performance practitioners as essential to enriching scholarship and extending the reach of its work.

The APGRD’s ‘Performing Epic’ project has used this approach to build on contemporary interest in the epic poems of antiquity and investigates the reception of epic in any medium (opera, dance, film, radio), language, country, and era.

Since 2011, the project has catalogued epic performances from all time periods – from the Chicago Court Theatre’s Iliad (2011) to Ugandan singer Geoffrey Oryema’s The African Odysseus (2002) and thousands more – making the information available to researchers via its on-line database.

Particularly interesting has been the work with contemporary artists inspired by epic. ‘The oral tradition of Homer and Ovid are speaking to new generations of writers and performers,’ explains APGRD Director, Professor Fiona Macintosh. ‘Moving away from the restriction that text is always fixed can be very liberating.’

The interest in epic however, is not just about form but content. ‘The ancient poets deal with issues of anger, conflict and tragedy so powerfully’ continues Macintosh, ‘and look at both the ‘big picture’ and the ‘local’ with such precision. It’s inspired many artists such as Kae Tempest’s reworking of Homer’s Iliad and Ovid’s Metamorphoses in her collections Brand New Ancients and Hold your Own.

Another APGRD project is the production of digital resources, including two interactive e-books on the performance histories of Medea (2016) and Agamemnon (forthcoming). The books have been curated by an APGRD team led by Fiona Macintosh and archivist Claire Kenward, and draw on the Centre’s academic research and archive material – as well newly commissioned artifacts such as graphic designs, maps, interviews and specially filmed performances.

‘Medea has had a great reception,’ says Fiona Macintosh. ‘Its really exciting to see it being taken up so enthusiastically by universities, schools and theatre practitioners – allowing us to take our archive material and research ‘out of the vaults’ to new and varied global audiences.’

She concludes: ‘Working with performers and the public is not just about sharing our knowledge. We learn as performers create, and the audience responds to, a performance – and it inspires us to ask new research questions. It’s absolutely essential to our scholarship at the APGRD, and will continue to be key to our future work.’

Fiona Macintosh is Professor of Classical Reception, Director of the APGRD, Fellow of St Hilda’s College, and Curator of the Ioannou Centre at the University of Oxford

'The APGRD are a brilliant group of people – helpful, informed and passionate about their work. They are also incredibly generous with their knowledge and have gone a long way towards keeping Classical theatre alive on our stages and alive in the minds of a new generation of playwrights.'

'As an artist and teacher, APGRD is a touchstone for me. It is a place where my artistic ventures are met, supported and enabled by rich seams of knowledge and rigour. The team are always looking to extend their knowledge of current creative thinking by engaging with practitioners and their work and engendering dialogue about their practice. As a result, their own work with students is leading contemporary research in the field.'