Baroness Amos. Photo by Jonathan Self

It is not the sort of telephone call you receive every day, says a slightly stunned Baroness (Valerie) Amos, the Master of University College, who appears surprised by the call she received, inviting her to become a Lady Companion of the 674-year old Most Noble Order of the Garter.

Membership of the Order, founded in 1348, is an honour reserved for royalty (domestic and overseas), former prime ministers and highly-esteemed individuals, including judges, generals and public servants. Only one other person was made a member of the Order in the most recent New Year’s Honours list – the former Prime Minister Tony Blair (and half a million people objected to this appointment).  Did anyone object to her appointment? Baroness Amos laughs diplomatically, ‘Not as far as I know, although I haven’t checked social media.’

She was more likely than most to receive such a call from the Palace - after decades of public service, as a former government minister, long-term leader of the House of Lords, UN under-secretary general, former British High Commissioner to Australia, former head of SOAS and now Master of Univ. So, if not her, who?

Baroness Amos is the first person of colour to be appointed as a Companion (knight or lady) to the Garter.  (Haile Selassie I, the late emperor of Ethiopia, was a royal member of the Order)

Baroness Amos, though, is the first person of colour to be appointed as a Companion (knight or lady) to the Garter.  (Haile Selassie I, the late emperor of Ethiopia, was a royal member of the Order).  And she will be installed as part of the annual ceremony which takes place at Windsor in June. Her badge coat of arms (currently under construction) will be placed in her stall in St George’s chapel and her banner will hang overhead. Talking in her office looking down on Oxford’s high street, Baroness Amos admits she has already been talking to Garter King of arms about what should be on her personal coat of arms. She wants a reference to education and learning, a personal passion, as well as something about Guyana, the place of her birth, and her longer term lineage in West Africa. She also would like something about global affairs.

‘But I don’t want it to be too busy,’ she says, optimistically. 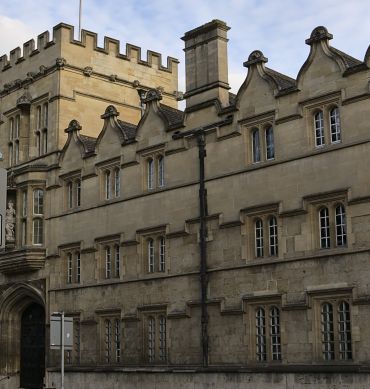 University College Oxford Credit: Shutterstock
Baroness Amos is conscious of the honour of this appointment[1], and looking forward to seeing her personal coat of arms, ‘Not something I ever would have thought I’d have.’

Being first is not always something with which she is comfortable, though. Baroness Amos was surprised in 2015, when she was appointed Director of London’s prestigious School of Oriental and African Studies, to be told that she was the first person of colour to lead a UK university.

‘It was quite surprising that this was the case in Higher Education,’ she says with concern.

It had never occurred to Baroness Amos that she would not go to university. Both her parents were teachers and education was very much part of life in the Amos household. In fact, she says, her brother’s decision not to go to university was far more surprising.

‘It was a big deal,’ she says, more than four decades after the event.

She left her Kent home for university in the 1970s, to take up a place at Warwick to study sociology. You really could not get much more ‘on trend’ than that. Warwick was the epicentre of political student activism, had numerous high-profile academics, and it offered a range of courses that the young Valerie was keen to pursue including options in women’s studies, international relations and the sociology of race relations.

‘There were so many opportunities,’ she says. ‘It was very forward looking and had everything that I was interested in.’

But, she says, she actually applied for different subjects at different institutions – ranging from English to Politics.

In the 1970s, she took up a place at Warwick to study sociology. You really could not get much more ‘on trend’ than that. Warwick was the epicentre of political student activism, had numerous high-profile academics, and courses that the young Valerie was keen to pursue... women’s studies, international relations and the sociology of race relations

Her interest in education has been defining. She would go on to take further courses at Birmingham and East Anglia – and for the last seven years, since becoming Director of SOAS, she has been a leader in higher education.

Arriving at Univ in 2020, she says, was not the best time, in terms of the full Oxford experience. For much of her time as Master, Baroness Amos has presided over multiple changes and iterations of the requirements around COVID-19 – with online learning and social distancing replacing the sort of college atmosphere for which the university is renowned.

She reels off the stages students and staff have been through during the pandemic, recognising the difficulty and stress caused. But, typically finding an upside, she says, ‘There’s nothing like being in a state of adversity to help an individual understand a place and the culture....although it has been difficult getting to know people.’ 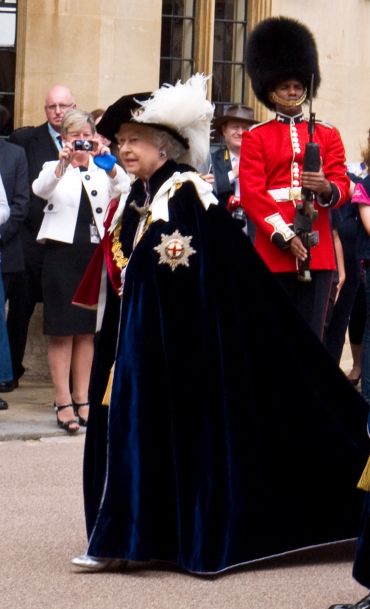 Her Majesty the Queen on Garter Day Credit: Shutterstock
Clearly intent on being involved with Univ life, Baroness Amos, speaking while some restrictions were still in place, is ready to plunge into collegiate life – and meet more of the students.

‘It’s been harder to meet them [during the pandemic],’ she says. ‘It’s not the same online...but I am really looking forward to doing so and to being part of the College.’

She is also very interested in ‘equalities and inclusion’ and keen to demonstrate that academic excellence can go ‘hand in hand’ with diversity.

‘Univ has been a pioneer in this area,’ she says. ‘In the past, young men from the north were supported to come here. It has been very much at the centre of the drive to increase diversity.’

And more recently, Univ pioneered the Opportunity Programme which was adopted by the central university as Opportunity Oxford.  Baroness Amos adds, ‘A lot of things have changed, but not enough...We need to create a culture which encourages people. Young people expect it.’

She has been at the forefront of equalities action for decades. So does the former head of the Equal Opportunities Commission, think past attempts to achieve equality failed or were somehow deficient?

‘The context was different in the 1980s,’ she says. ‘Our knowledge and understanding were different....information is global now.  Black Lives Matter went around the world instantly after the murder of George Floyd.’

Baroness Amos adds, ‘There was a global reaction and...there has been a recognition that people everywhere, from every community, need to be included.’

She maintains, ‘Our culture as Oxford has to adapt.’

But, she says, ‘I see this as adding to, rather than taking away....so students feel they belong, whatever their background and values, and they can make a contribution.’

Our culture as Oxford has to adapt...I see this as adding to, rather than taking away....so students feel they belong whatever their background and values, and they can make a contribution

Although keen to see some change, Baroness Amos is highly positive about the education at Oxford, ‘The tutorial system is just extraordinary.’

As the former leader of the Lords, Baroness Amos has experience of an historic institution undergoing change, ‘When I arrived in the House of Lords in 1997, there were a few women, over time there have been more...and the culture has changed, the way it works has changed. Now, we have a successful schools outreach programme and electronic voting’.

She adds, ‘Women have only been at Univ for 43 years, the college was founded nearly 775 years ago....it’s a very short time in the arc of history....there is still more work to do.’

But she does not want to see history erased – far from it.

‘We are in a university. A place of knowledge’

Baroness Amos speaks very much from the heart. Through her work with the UN, she travelled widely in West Africa, from where her ancestors were taken into slavery.  She is planning to do a DNA test ‘one of these days’. But this year she has her hands full, with throwing herself into Univ life – and taking up her new role in Windsor.

[1] She will continue to be Baroness Amos. Had she not had a previous title, as a Lady Companion of the Garter, she would have been entitled to be called Lady Valerie Amos.