For a China expert, the self-deprecating Professor Henrietta Harrison is a lot like a Classics professor: rigorous, enthusiastic and politely accustomed to wild-but-common misconceptions about her subject

For a China expert, Professor Henrietta Harrison is a lot like a Classics professor: rigorous, enthusiastic and politely accustomed to wild-but-common misconceptions about her subject. And it’s no wonder. Professor Harrison took Classics as an undergraduate and only elected to study a language people still speak after graduation.

She admits studying Chinese and China is a lot like Classics.  ‘You can do lots of different things [as a China specialist],’ she says enthusiastically. ‘Including anthropology, which you can’t do as a Classicist.’

It never really occurred to anyone – least of all the self-deprecating Professor Harrison - that she would become an academic. There were lots of books in her family home, her father went to Oxford and, she says, she went to a very good school.

‘Family life [though] was focused on children and dogs,’ she says, amused.

I decided I didn’t want to be an academic, so I learned a new language with the intention of going into business.  Fortunately this didn’t happen as I would have been dreadful, since I don’t like meetings

Professor Harrison’s paternal grandmother had been a ground-breaker, attending Trinity College Dublin to study medicine. She had wanted to study Literature, but, bizarrely, medicine was thought more suitable for a girl. In the event, she did not graduate.  She did however encourage Henrietta to study Latin, which she wished she had learned herself.  But laughs the professor, ‘I thought I might become a teacher...or go into business.’

She smiles, ‘I did Classics at Newnham College, Cambridge and I decided I didn’t want to be an academic, so I learned a new language with the intention of going into business.  Fortunately this didn’t happen as I would have been dreadful, since I don’t like meetings.’

She won a Kennedy Scholarship to study Chinese at Harvard, on a course that was designed to allow people to switch into Chinese from other disciplines.

‘We now have a postgraduate degree that does that here at Oxford,’ she says. ‘But then it was not offered in the UK.’

As part of the degree she spent a year studying Chinese language in Taiwan, and also visited China for the first time.

She admits, ‘When I came to Oxford in the 1990s [to take a doctorate in Chinese, after her Masters at Harvard], I had much worse Chinese than all my classmates, most of whom came from Hong Kong....and at our first meeting the professor told me that if I didn’t pass the master’s degree examinations at the end of the first year I would have to leave.

When I came to Oxford in the 1990s...I had much worse Chinese than all my classmates, most of whom came from Hong Kong....and at our first meeting the professor told me if I didn’t pass...at the end of the first year I would have to leave. (In fact, she failed...but stayed)

In fact, Professor Harrison failed the exam in Classical Chinese, but she was not thrown out and went on to spend a year at the archives in Nanjing and many later summers on the Chinese mainland, determined to improve her language and study the country’s history.

‘I’ve never really spent enough time there, but my Classical Chinese has improved since that exam,’ she laughs again and bats off obvious questions with good humour and understanding. Did you have poor language skills because Taiwan uses classical Chinese, I ask, meaning ‘traditional forms of the characters’?

‘There are whole layers of errors in that question,’ Professor Harrison says with sympathy and a little amusement, before patiently explaining Chinese script [sorry]. 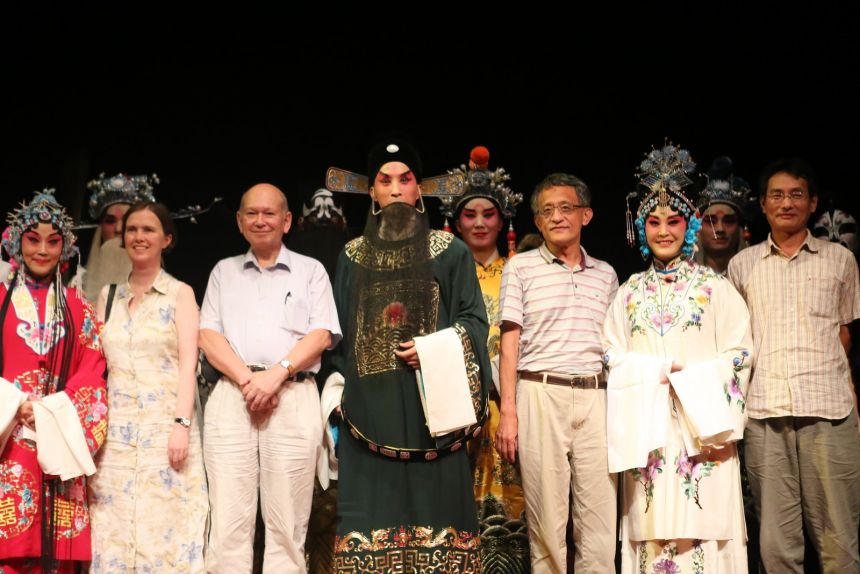 Professor Harrison with Professor David Faure and friends in southern Shanxi. Photo by Zhou Wen
‘I spent my childhood making historical costume dolls and little houses,’ she confesses with much laughter.Having become proficient in the language, Professor Harrison has concentrated on the history of China - reflecting early interests.

Professor Harrison speaks with evident fondness and enthusiasm for China, and she has spent considerable time over the last 30 years in Chinese archives and travelling around the vast country. She has visited small villages and large cities and has seen considerable change, ‘The building has just been phenomenal.’

Her interests primarily lie in relatively modern history [in Chinese terms]...but her latest book goes back to the 18th century....and the famed Macartney mission to China in 1793...when questions arose as to whether George Macartney 'kow-towed' to the Qing emperor [she suspects he did]

What has been most different, she explains, has been the growing urban landscape, ‘Some countryside has become the city, or the edge of the city, and large numbers of people have left the countryside for urban jobs...agricultural work has been feminised and is now done by married women and older women. It is hard work and not very well paid.’

Her interests primarily lie in relatively modern history [in Chinese terms]. She has written mainly about the twentieth century, but her latest book goes back to the 18th century. The Perils of Interpreting: The Extraordinary Lives of Two Translators between Qing China and the British Empire concerns the famed Macartney mission to China in 1793, when the British ambassador met the Qing emperor. The events have passed into mythology – as to whether George Macartney had ‘kow-towed’ to the emperor and whether the emperor had failed to realise the importance of the West.

‘It is one of the few events about which many have heard – albeit mainly incorrectly. And Professor Harrison’s new work dispels some misconceptions and focuses on the two interpreters at that famous meeting. [She suspects Mcartney did kow-tow].

Her research has often focused on particular individuals, events and locations – but it has also focused on Catholics in China [of which more later].

Being an historian is partly about finding things out,’ she says. ‘But it’s also about telling people about them...and it’s nice to be able to use some of the Latin sources from Catholic Church archives to make a genuine contribution as these aren’t easy for Chinese scholars to access or read.’

In her travels, Professor Harrison came upon a Catholic village – there are many in China – which has survived centuries and the Cultural Revolution as a community very much part of the global Church.

Although the archives of the government in Beijing for the period after 1949 remain closed to researchers, those of earlier periods are open and Professor Harrison’s recent research on the eighteenth-century means that she has not personally experienced problems. She says there is an enormous amount of archive information available, particularly concerning the imperial past and the lives of ordinary people.

‘This has proved fascinating,’ she says.  Among other research, in her travels, Professor Harrison came upon a Catholic village – there are many in China – which has survived centuries and the Cultural Revolution as a community very much part of the global Church. This became the subject of another work, The Missionary's Curse and Other Tales from a Chinese Catholic Village.

She explains, ‘I heard about it and wanted to see the village and somebody had a driver free that afternoon....and we went in search of it. We found the village, which has a Gothic church and all but one person was a Catholic. It was really interesting.’

But how could it be that a Catholic village was in the middle of the Chinese countryside? [Not an entirely stupid question, as it turned out].

How could it be that a Catholic village was in the middle of the Chinese countryside?...She explains, the village was established by three Catholic families in the late eighteenth century. They had little knowledge of the Church...But were inspired to be Catholics, having encountered missionaries, possibly Jesuits

According to Professor Harrison, the village was established by three Catholic families in the late eighteenth century. They had little knowledge of the Church, beyond basic information and prayers. But they were inspired to be Catholics, having encountered missionaries, (possibly Jesuits who are famous for their mission to China) when they were away trading or working in Beijing and set about creating their own Catholic community.

They were many miles from the capital and had no resident priest and, therefore, no sacraments, but they conducted long liturgies and gathered to worship in people’s houses initially. In later years, they would have occasional visits from a priest, maybe once in 20 years, and the village – and others like it – were staunchly Catholic. Even during the Cultural Revolution, the villagers remained firmly Catholic – although they may have had little choice.

‘If you came from one of those places, everyone would know you were Catholic...it wasn’t easy to leave,’ she says. ‘Some even went to prison [during the Cultural Revolution, when they were required to denounce the Church].’

But the village survived and is today an historic anomaly: a village dedicated to the Catholic Church in a country where Protestantism is the most popular form of Christianity.

‘If you go to villages and talk to people, some will have nothing to say, others love to tell their stories – and their relatives are amazed that you want to listen.

The main research is done in archives,’ she says.  An earlier work, The Man Awakened from Dreams, was based on the preserved diaries and writings of Liu Dapeng, who lived in north China village from 1857 to 1942.

Meanwhile, Professor Harrison’s research into the Catholic village brought together her interest in China and her expertise in Classics. Much of the remaining material about the village is kept in the Vatican archives – in Latin – rather than in local archives. She spent several months there, reading through all the papers.

Professor Harrison’s research...brought together her interest in China and her expertise in Classics. Much of the remaining material about the village is kept in the Vatican archives – in Latin

Next, Professor Harrison plans to look at the experiences of ordinary people who lived through the 1949 Communist revolution. Not many people are around today who will remember accurately, having filtered memories through decades of retelling and remembering. She would like to go back to the villages, to interview those who do remember. But there is a ‘phenomenal amount’ of published information as well, she says.

Eight years...isn’t that an auspicious Chinese number? Is this a coincidence? It is impossible to suggest such a flippant idea. Unlike many experts of far-flung lands, Professor Harrison is most comfortable at home and does not entertain ideas of disappearing into the land of her studies. She loves the country but, Professor Harrison says, she is ‘a foreigner in China’. But she emphasises the people are ‘endlessly interesting, warm and welcoming’.

Professor Harrison emphasises the [Chinese] people are ‘endlessly interesting, warm and welcoming’ but says she has no intention of leaving Oxford

Anyway, she says decidedly, ‘I have no intention of leaving Oxford. I enjoyed living in the US, but England is so beautiful and I am at home here...I feel very comfortable. I feel part of it. I wouldn’t feel as “at home” in the US or China. I never wanted to, although [she says confidentially] Harvard’s China library is better.’

And she is still worried about her language skills. The pandemic has, of course, greatly affected academics’ ability to travel to China. The last two years have seen students going, as Professor Harrison did, to Taiwan.

‘Even this summer, I don’t suppose we’ll be able to go to China,’ she says sadly. ‘It’s infuriating...and my Chinese will be getting much worse.’