Millions of lives have been lost, and there has been disruption to daily life on a scale unseen in peacetime thanks to COVID-19. But, speaking before the identification of the new Omicon variant, Dominic Wilkinson, professor of medical ethics, explained in a matter-of-fact way that the pandemic has not been as devastating as experts feared.

While in no way underestimating the profound impact of the virus on individuals and communities, Professor Wilkinson said that, before COVID, a health crisis had long been forecast, ‘People have been expecting another pandemic for decades. But this has been nowhere near as bad as it might have been. If you look at other severe illnesses, the morbidity and mortality rate from COVID has been relatively low, even though there has been a huge number of deaths.’

People have been expecting another pandemic for decades. But this has been nowhere near as bad as it might have been...How much worse could it have been? Well, considerably

How much worse could it have been? Well, considerably, says the hospital consultant, who has worked on NHS COVID wards during the crisis, in addition to his ‘day jobs’ of caring for very sick infants and being Oxford Professor of Medical Ethics and Director of Medical Ethics at Oxford’s Uehiro Centre for Practical Ethics.

He explained, other recent novel infections (for example SARS, MERS, or Ebola) led to death in between 1 in 10 (SARS) to 5 in 10 (Ebola) cases and pointed out that the mortality rate in the Spanish Flu of 1918 was many times greater than COVID. Some 50 million people - 2.8% of the global population - died. One third of the world’s population is estimated to have caught it. Meanwhile, there have been around five million deaths (so far) from COVID – which is some 0.06% of the global population. So yes, even though there have been devastating consequences, things could have been a lot worse.

One reason that this matters, said Professor Wilkinson, is that one of the most important features of this pandemic is in helping us to prepare for future similar (or worse) threats. As tempting as it is to want to move on, it is important to look at what has been done well and what could have been improved, insisted the ethics expert.

‘We have the opportunity to look, with the benefit of hindsight at what happened at the time, when we had imperfect knowledge,’ he says. ‘It’s easy to reflect that we [in the UK] should have made different decisions – for example locked down earlier. But choices that are clear now were not as obvious at the time.’

With concern over future pandemics, he added, ‘We need to think very carefully about how we would coordinate as a global community. There has been huge success with the vaccines, but insisted Professor Wilkinson, the distribution has been incredibly uneven and to the advantage of wealthy over poor countries. For example, many countries have given booster doses to their own citizens while millions of people in other countries were still waiting for their first dose.’

Professor Wilkinson maintained, ‘At the present time, it looks like, in a number of developing countries, the pandemic has been not been as bad as feared. Meanwhile cases are once again surging in continental Europe. So the massive inequality in vaccine distribution and choices that favour wealthy developed nations have not been as disastrous as they could have been. But that does not mean the decision to prioritise booster doses was the right one. If we did the right thing, we did it by accident.’

At the present time, it looks like, in a number of developing countries, the pandemic has been not been as bad as feared. Meanwhile cases are once again surging in continental Europe....If we did the right thing, we did it by accident

Such ethical questions and debates are at the heart of Professor Wilkinson’s work at the Uehiro Centre. And ethics have been raised, debated and, sometimes, ignored (by politicians), during the last 18+ months.

The pandemic has seen philosophical questions go mainstream and become the subject of bar room debate (had they been open). And Professor Wilkinson’s opinion and that of his colleagues, has frequently been sought by the media, as questions arise and answers are demanded.

Perhaps the biggest philosophical question during the pandemic, underpinning all the other questions which have arisen, is whether an individual’s rights and freedom should be paramount and to what extent the state should impinge on their citizens’ lives when it is not directly in their interests. This fundamental ethical question has arisen in range of guises:

It has led to polarised camps, threats against researchers and divided communities. And Professor Wilkinson and colleagues have very much been in the thick of it.  He said, ‘There have been questions over who should get the vaccine first, whether it should be the most medically vulnerable people or other groups.

Not since Ancient Greece can philosophy have been as high profile – and for Socrates, at least, that did not end well... it is not always welcomed and politicians have tended to take expedient rather than principled action.

Not since Ancient Greece can philosophy have been as high profile – and for Socrates, at least, that did not end well. They may have given voice to ethical questions and answers, but it is not always welcomed and politicians have tended to take expedient rather than principled action

Rather generously, Professor Wilkinson laughed at the idea and made an ethicist’s joke, ‘At the beginning, everyone talked about “following the science” but that seems to have disappeared from the lexicon. Perhaps it is because recent scientific advice has not necessarily supported preferred policy choices. It highlights the point that these are fundamentally questions of value, not simply scientific fact. You still have to decide what to do.’

He maintained, however, that, even if politicians have not always followed either the science, or the ethics, it is good that these things have been discussed and debated.

‘It’s an on-going challenge,’ said Professor Wilkinson. ‘...but one of the ways philosophy can help us is by informing our deliberation. Philosophy has come out of the ivory towers and has helped people think deeply about what they value, about what matters.’

One of the ways philosophy can help us is by informing our deliberation. Philosophy has come out of the ivory towers and has helped people think deeply about what they value, about what matters

Professor Wilkinson insisted, ‘In Practical Ethics, we do not aim to tell people what to think or the right thing to do. There may not be a single right answer. We often don’t know. But what is vital is to improve the quality of debate and understanding of the arguments and values at stake – that’s one of our key goals.’

Next time [oh no], perhaps, there will be more ethically-informed action, he said, if communities take the opportunity to reflect on this pandemic and learn the lessons.

But, he pointed out, the pandemic has helped us understand what people will and will not ‘tolerate’.

‘At the start, it was thought that the public (in countries such as the UK) would not accept restrictions to their personal freedoms. But there was strikingly high acceptance and support for lockdown measures.

‘Then there was a concern about whether lockdowns could be sustained. While many in the community thought that it would all be over by Christmas, others worried that the current phenomenon of successive waves of infection stretching over a period of several years might be more likely.

‘Then there would be a question of the sustainability of responses to the virus. In recent months, people have been suffering from pandemic exhaustion. Some of that frustration has bubbled over into violent street protests with reinstitution of lockdowns in Europe. We have a unique opportunity to gain insight into the public reaction to the pandemic. Now we need to incorporate some of those insights into emergency plans for future similar threats.’ 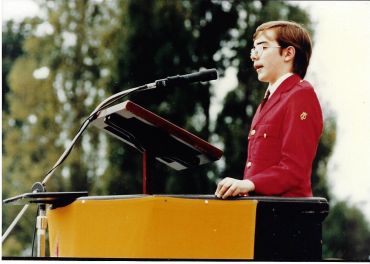 The third doctor in the family, the quietly spoken half-Australian followed his grandfather and father into medicine. And he followed his father into paediatrics. But, his high school passion for debating and argument re-emerged after medical school in Melbourne, when the young doctor Wilkinson undertook a Masters in bioethics at Monash. He came to Oxford in 2007 to pursue a doctorate in philosophy. It followed naturally from the work he was doing.

‘In new born intensive care units (NICU),’ he said ‘we look after babies born just over mid-way through a pregnancy, weighing as little as half a kilogram. In the walls of the NICU, we experience the beginning and the end of life – sometimes in close proximity. This medical work regularly raises profound questions about moral status, personhood, quality of life, disability, risk, uncertainty, about how to balance the overlapping and conflicting interests of different individuals.’

As a new-born care specialist, Professor Wilkinson has been at the forefront of high profile cases involving very sick children and does not underestimate the difficulties and heart break for families and hospitals, while, feeling that trying to step back from the emotions and think what is best for the child from a philosophical perspective is important.

Analytical philosophy aims to shine a light on difficult and dark questions. When we do so we may still find (and often do) that there are no good answers, only undesirable options. But that understanding is itself valuable

It helps, he said, in talking to parents. But it does not necessarily make decisions easier, ‘Analytical philosophy aims to shine a light on difficult and dark questions. When we do so we may still find (and often do) that there are no good answers, only undesirable options. But that understanding is itself valuable.’

His book, ‘Death or Disability. The Carmentis Machine’ looked at decision making for critically ill children. And it drew on ancient as well as contemporary wisdom, Carmentis was the Roman goddess of childbirth and prophesy.

‘Our modern day prognostic tools are more sophisticated (and more accurate) than consulting the oracle. But they are seeking the same answers – what does the future hold for a child? I imagined that we had a perfectly accurate machine for prophesying the future for our tiny gravely ill infants, a machine I called ‘the Carmentis Machine’.

‘It became very clear to me that, even if we eliminated prognostic uncertainty, moral uncertainty would remain. What future life would be sufficiently poor that life-sustaining treatment may be withdrawn and the child allowed to die? What level of wellbeing would be so great that treatment must continue, even if parents do not wish it? These remain profoundly difficult questions.’

Although he would no doubt dispute the word ‘enjoy’, Professor Wilkinson, clearly relishes philosophical debate and he said that, while he anticipates working on pandemic related questions for some time yet, ‘It would be nice to return to some other questions.’

He is not one for a quiet life, though, and gave as an example, the highly contentious forthcoming Bills in both England and Scotland relating to assisted dying.

Yes...democracy....The worst option, except for all the others

‘There has been evidence of strong popular support for assisted dying in the UK for more than three decades. This question is not going to go away,’ said Professor Wilkinson, who has written extensively on the subject.

But isn’t there strong support for capital punishment as well?

‘Yes...democracy,’ he muses. ‘The worst option, except for all the others.’