Sneha Krishnan is Associate Professor in Human Geography and Tutorial Fellow at Brasenose College. She comes to this position from a Junior Research Fellowship in Human Geography at St John's College, Oxford (2015 - 2018). Sneha did all her graduate work at Oxford (2015) and her undergraduate degree at the University of Madras in India (2009).

As a cultural and historical geographer, Sneha is interested in gender, childhood and the intersections of bio- and geopolitics in postcolonial contexts. Her doctoral research used ethnographic and historical research to focus on the spatialities of risk and safety in the lives of young middle-class women in the South Indian city of Chennai. Building on this, her monograph-in-progress examines hostels for women in historical context as sites where imperial logics endure into the postcolonial present.

In new work, Sneha builds on these interests to explore three inter-related themes. In two collaborations on childhood and feminist geopolitics, Sneha's work examines the territorial and demographic discourses that undergird constructions of childhood and youth in the Global South. A second project examines the gendered spatialities of suicide in India, specifically focusing on the historicity of 'youth suicide' as a site where territorial imaginaries and biopolitical concerns converge. A third methodological collaboration focuses on gender and digitized archives, with the goal both of creating a digital archive of women's materials from South Asia, as well as of building debate in feminist interdisciplinary studies on the spatiality of digital knowledge production.

Dr Krishnan has experience of interviews for media outlets including the Times of India. 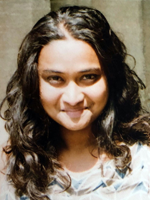