This summer, Thomas Hale, Associate Professor in Public Policy (Global Public Policy), has been working full force on addressing one of the UN Paris Agreement’s key innovations from the December 2015 meeting: to open the door for cities, companies, and other sub-state and non-state actors to engage with non-governmental climate regimes. 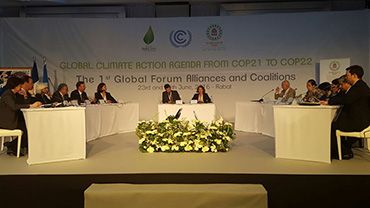 Climate change meeting.
As part of his Galvanising the Groundswell of Climate Actions Initiative, Dr Hale chaired meetings in Rabat, Morocco, marking the start of a series of consultations with the aim of elaborating on the UN’s framework for linking the increased surge of bottom-up action to the international regime. These meetings are set to culminate in the creation of an institutional framework to be agreed at the next UN climate summit, COP22, in November 2016.

“Studies have shown that bottom-up climate actions have the potential to eliminate 2.5-4 billion tonnes of CO2 from the atmosphere by 2030,” said Dr Hale. “In order to realise this potential, it is essential to question how the UN process can best catalyse action by cities, companies, civil society groups, and others. In turn, we can then consider how these actions best advance national climate policy and international negotiations.”

Last week, Dr Hale was in New York, where a number of further meetings on this topic were being held on the margins of the UN General Assembly meeting.

His work at the Blavatnik School explores the ways in which we can manage transnational problems effectively and fairly, with a particular focus on environmental and economic issues. He is also part of the Global Economic Governance Programme.