Research on Improving Systems of Education (RISE) programme has started working in three countries. Tanzania, Vietnam and India will be the focus of the first country-specific research projects into how global education systems can, and should, be reformed to offer better learning for all. Each research project will be funded by £4.2 million over the course of six years. 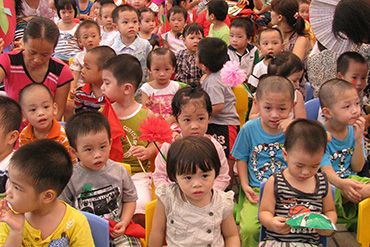 Kindergarten in Vietnam.
In Tanzania, despite near universal primary education, basic literacy and maths skills have dropped in recent years. The research project will see a team of 11 experts from Georgetown University, Twaweza, the University of Dar es Salaam and the World Bank to analyse the effects of the ambitious reforms and investment in education which the country’s Government is implementing in an attempt to improve learning in primary and secondary schools. Read more about the Tanzania research project.

In India, primary-school enrollment is almost universal, but learning outcomes are low. As part of the research project, a team of international experts led by researcher at the University of California San Diego, the Abdul Latif Jameel Poverty Action Lab (J-PAL) South Asia in India, and University College London will evaluate reforms in Madhya Pradesh and Delhi, two regions where government has made significant policy commitments to improve education systems. One of the reforms being focused on is the use of CCTV in classrooms to provide teachers with personalised feedback. Read more about the India research project.

Finally, the project in Vietnam offers a positive perspective. The country has been successful in creating an education system that has led students to outperform those in far wealthier nations. The 2012 Programme for International Student Assessment ranked Vietnam 17th in math and 19th in reading (out of 65 countries), surpassing both the US and UK. A research team of nine experts plan to assess the impact of educational reform, and look at how policy levers made Vietnam’s exceptional achievements possible, and if new reforms are able to build on its achievements. Read more about the Vietnam research project.

RISE, which is managed and implemented through a partnership between the Blavatnik School of Government, Oxford Policy Management and the Center for Global Development in Washington DC, was created in 2015 to address a global crisis in education.