The Research on Improving Systems of Education (RISE) programme, which was launched in 2015 to address a global crisis in education, aims to collate evidence on schooling worldwide in order to enhance children’s learning globally. 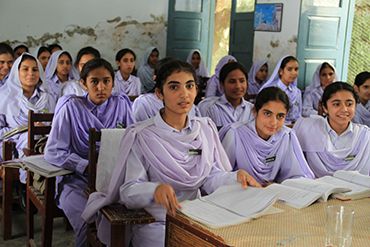 Girls in school in Khyber Pakhtunkhwa, Pakistan.
Work is due to begin in Pakistan, where, despite a significant increase in government spending, low levels of learning remain the norm and enrolment growth has stagnated in recent years. The research will look at different types of system-level frictions such as those that affect the private and public sector, household demand and the interaction between the different actors in the education ecosystem, and will utilise market analysis.

“The education landscape in Pakistan is changing rapidly. How Pakistan harnesses this tremendous potential for positive change and manages the challenges in the system will determine not only the future of education but, significantly, the future of the country itself,” said Tahir Andrabi, the Country Research Team leader, a professor of economics at Pomona College, and a founding board member of the Center for Economic Research in Pakistan (CERP).

Funding from the UK’s Department for Internal Development and the Australian Government’s Department of Foreign Affairs and Trade allows for six, six-year research programmes (each will receive £4.2 million); this study in Pakistan is the fourth, with projects in Tanzania, Vietnam and India announced earlier this year. The final two projects are expected to launch in spring 2017.