BSG's Maya Turdor was an international observer during the elections in Myanmar/Burma. In this blog for the Washington Post's Monkey Cage she highlights four questions on which the country's future hinges. 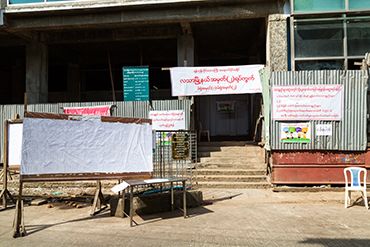 The polls are closed and the counting is finished. Burma’s Nov. 8 election has resulted in a landslide victory for Aung San Suu Kyi’s party, the National League for Democracy (NLD). The election itself was deemed ‘competitive and meaningful.’ Voters in the country also known as Myanmar were not systematically disqualified, ballot boxes were not systematically stuffed, and voters in rural regions weren’t cowed into voting for the incumbent party. Still, the elections were structurally unfair, given that the military passed an amendment disqualifying Suu Kyi from the presidency. That 80 percent of eligible voters turned out to support the opposition was an undeniable moment of triumph for the forces of democracy and for the determined and dignified voters who stood for hours to cast their ballots.

The historic election is just the beginning of an arduous and fragile democratic transition for this country of 51 million people. In 1990, after a similar NLD landslide, the military vowed to hand over power to any government creating a new constitution. Months later, it backtracked brutally. While many observers expect 2015 to be different because the military now has constitutionally-reserved powers that allow it a continued say in politics, a democratizing future for Burma is hardly assured. The new government will not be formed for several months. Until then, we are likely to see a lot of shrewd bargaining between the incoming government and the military. Looking ahead, the country’s democratic future hinges most critically on these four questions:

Genuine strengthening of the democratic transition will require a constitutional reduction of the military’s role in politics. The 2008 constitution affirms that a basic principle governing the country is to allow the ‘Defence Services to participate in the national political leadership of the state.’ The constitution accords the military 25 percent of the seats in the lower and upper parliament, 30 percent of the seats in regional parliaments, and full control over the three most powerful ministries: Defense, Home Affairs, and Border Affairs. Any constitutional change, including change that would enable Suu Kyi to become a future president, requires a super-majority of more than 75 percent of parliament. This grants the military an effective veto over constitutional change.

[Burma votes on Sunday. Why do authoritarian governments even hold elections?]

Changes to the constitutional structure of power will be foremost among the incoming government’s priorities. Yet diminishing the Tatmadaw’s (Burmese military’s) writ of power requires its own acquiescence. Since militaries with histories of coups are more likely to commit subsequent coups, what prospects are there for the military to willingly and enduringly retreat to the barracks?

The military’s desire to bring the country onto the lucrative development path followed by other East Asian tigers has probably contributed to its surprising decision to liberalize politics in 2011. But will the military stay out of power, as has happened in Indonesia? Or will it dive back into politics at the next opportune moment, as happens in Pakistan and Thailand? Indonesia too had military reservations in parliament – 15 percent of seats just before and 7-8 percent of seats just after the 1998 transition. In Indonesia, the military was induced to draw down its parliamentary and economic footprint over the post-transition decade by international pressure, a vigorously free press and a wide array of civil society organizations working on military and political reform. If the Burmese military is to follow a similar path of willing retreat, it will need continual engagement by these same actors. How the military’s role now evolves will be critical to Burma’s democratic future.

2. How will the incoming government choose to spend its ample political capital?

Whether Burma travels Indonesia’s path to democracy or Pakistan’s path to perpetual instability will also be determined by whether the new government can successfully govern and thereby undercut any rationale for future military intervention. In many ways, the new government will face challenges similar to those faced by a new government in many poor countries. How will it promote equitable development and stable ethnic power-sharing? How will it jumpstart modernization of its health and education systems? How will it initiate infrastructure development and manage the flood of foreign investment (and the inevitable environmental threats it raises)?

But unlike other poor and politically unstable countries, this election was fought and won simply on the basis of Suu Kyi’s titanic popularity. Consequently, we know very little about the incoming government’s programmatic agenda. Banking upon Suu Kyi’s personal charisma and legacy of sacrifice worked as an electoral strategy, but it will not suffice as a governing strategy. The NLD now possesses enormous political capital but also the weight of sky-high expectations. What will it choose to do first, how will it choose to do it and crucially, can it deliver?

3. Will the NLD develop leadership capability beyond Suu Kyi?

Going forward, Aung San Suu Kyi will serve as Burma’s Sonia Gandhi, selecting a mild-mannered president and ruling ‘from above’ while making all the decisions herself. The president will likely be someone similar to the elderly NLD former Vice Chairman Tin Oo who, not unlike India’s Manmohan Singh, is uninterested in developing an autonomous political career.

But regardless of who rules, will the NLD develop capable party leadership beyond Aung San Suu Kyi? Thus far, the signs have not been encouraging. Before the recent elections, the NLD’s executive committee rejected the candidacy of many vaunted leaders of the 1988 pro-democracy movement who had been crucial party supporters. Younger NLD members who were put forth as candidates for this election were gagged from speaking out on any policy issues. This was probably because the party’s executive committee correctly calculated that detailing policy agendas would subject the NLD to unnecessary criticism when relying on Suu Kyi’s popularity could deliver a landslide. But it is worth remembering that no NLD member has ever held an important elective office and that no NLD member has yet become an important leader through the party itself.

If the democratizing trajectory is to continue, this must change. My research shows that a well-organized national party with many experienced leaders was the single most critical explanation for the divergent democratic trajectories of nearby India and Pakistan. Democratic parties that centralize power in one individual are unlikely to remain in power when that leader passes away. Democratic parties that govern for prolonged periods are typically led by leaders whose careers are defined by party service. While Pakistan could not do without Jinnah at the governing helm of its nationalist movement to preserve its young democratic government, India could and did do without Gandhi at the governing helm of its nationalist movement. Will Suu Kyi encourage NLD leaders to emerge who can challenge her and thereby develop the party’s ability to govern without her, as it eventually must? Or will she continue to govern as a charismatic leader whose party will not long outlive her?

4. Will Suu Kyi finally speak out against Rohingya persecution?

During the past few years, Suu Kyi has refused to publicly condemn violence against the Muslim Rohingyas, regularly designated the world’s most persecuted minority. Viewing Suu Kyi through the prism of a Nobel Peace laureate and a beacon of moral courage, international supporters have been hugely disappointed at her willingness to condone the rising levels of anti-Muslim violence.

[Why the Rohingya will continue to flee Myanmar, even if we try to deter them]

But when seeing Suu Kyi through the prism of a politician whose predominant aim is to move the country away from military control, this decision can be seen as politically instrumental. The outgoing government’s encouragement of Buddhist extremism amounted to a textbook strategy for mobilizing a majority at the expense of a minority. The outgoing government thereby intentionally put Suu Kyi in a difficult position: if she spoke out against powerful Buddhist extremists, she would have lost votes among religious voters. Remaining silent as she did may have maximized votes but brought criticism from both right and left: for coddling Muslims by the influential Ma Ba Tha extremists and for being morally bankrupt by the international human rights community.

This strategy cannot be morally condoned, but it could be politically understood. Now however, armed with an absolute majority in parliament and the still-copious goodwill of the international community, will she spend some of her newfound political capital condemning the Rohingya violence and speaking out in favor of human rights for all those living within Burma’s borders? Or, paralleling Prime Minister Modi in neighboring India, will she continue to be silent and pander to an extremist base? Her actions at this formative moment will have enduring consequences for whether Myanmar will continue on the bumpy road towards democratic consolidation or falter on the basis of minority exclusion.