Many Rhodes Scholars from across the constituencies lost their lives during the conflict and are remembered publicly in the rotunda of Rhodes House. The listing of names includes those of German Rhodes Scholars, as well as those fighting for the Allies, which was unusual on memorials at that time.

Poem and information kindly reproduced with the permission of Rhodes House, Oxford. Original content from Rhodes House during the War.

The poem below appears in the 1916-1917 edition of The American Oxonian, the initials suggest the author to be William Chase Greene (1911 Rhodes Scholar, Balliol). 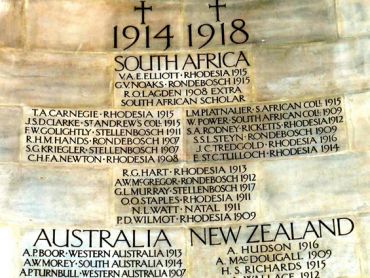 Lost Comrades: July 1915
A year ago in England, ere the storm
Burst on the summer stillness, we had met
Once more, and parted; and our hearts were warm,
Though words were few and poor for such a debt.
My comrades you had been in sun and rain,
In the cool shadow of grey college walls;
Out on the heathery hills where we had lain
I knew you, men not slow when manhood calls.
Today no field of Flanders but is red
With your life's best; and on the windy plains
Where all too soon the young Achilles bled,
The rim of golden sand your quick blood stains.
Lightly you spoke when I was at your side:
The death-word came, and lightly then you died.
W.C.G.