Legislation, passed in 1915, gave the Colleges greater flexibility in the management of finances, academic positions, prizes and awards, though Pembroke’s Governing Body had already resolved to ensure that students were not disadvantaged by serving in the forces. Student numbers fell dramatically - in 1935, thirty-five students had matriculated but, in 1914, this had dropped to seventeen. For the next three years, matriculations were in single figures and 1918 saw twelve students come up. The resulting vacant rooms were requisitioned by the military to house the School of Military Aeronautics which also billeted cadets in a number of other Colleges.

Content courtesy of the Master, Fellows and Scholars of Pembroke College, Oxford. 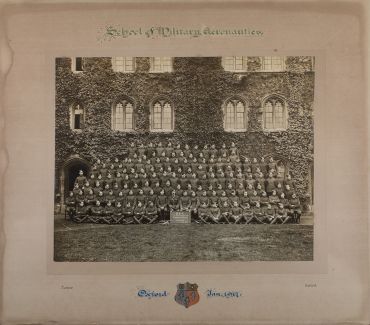 The drastic reduction in the number of students substantially reduced the College’s income but this was alleviated by generous grants from Magdalen College. As well as housing military personnel, Oxford showed its support for the allied cause by offering aid to some of the Belgian and Serbian refugees who arrived in Britain in 1914 and 1915. Lectures were also held at Pembroke as part of a ‘Kosovo day’ on 28th June 1916 to celebrate Serbian Independence Day. In 1916 the College addressed concerns about its own vulnerability to enemy aircraft and took out an insurance policy with Lloyds “for £10,000 at a premium of £15.0s.6d, subject to possible minor adjustments, to insure the College fabric, No.94 St Aldate’s, Nos. 12, 13 & 14 Pembroke Street, & No.11 Beef Lane against damage from enemy aircraft”. As well as protecting the fabric of the College, consideration was also given to its staff. On 8th December 1916, the Servants’ Committee presented a report to Governing Body, suggesting the allocation of a sum of £55.10s “to the relief of those servants on the staircases who were suffering from the effects of war”. This was approved and further grants were made throughout the war. 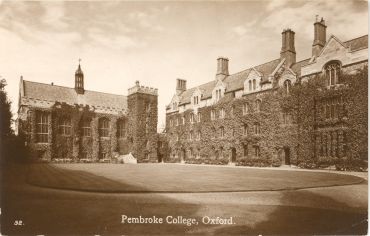 After the war, there was a huge influx of students to the University, both new and returning. From twelve matriculations in 1918, there was a peak of 102 in 1919 which included American Officer Students, accepted for two terms’ course of study. The college was also asked to accept the normal number of Rhodes Scholars twice a year in 1920 and 1921 to which it agreed. Returning students were given the privilege of counting military service against the residence requirements for their degrees. After the military had relinquished occupation of their temporary accommodation, the Colleges were left to tidy up and attempt to return to some semblance of normality. The Bursar entered into negotiations with the Army Agent and the President of the Quartering Committee in order to obtain satisfactory compensation payments for the wear and tear of the occupation. Another major post-war change was to the Junior Common Room (JCR) which had originally been established in 1795 as an exclusive wine club. An attempt to establish an alternative club - the short-lived "1913" Club - came to nothing, but, after WWI, a new JCR, open to all junior members, was created and the assets of the old JCR were sold to create a trust fund, which made occasional grants for general College purposes.