Margaret Bonfiglioli is a modern historian and author living in Oxford. In her new book (co-authored with historian James Munson) ‘Full of Hope and Fear, the Great War: Letters of an Oxford Family’, she tells the story of her grandmother, Violet Slater, who lived in Park Town, North Oxford. The book examines her grandmother's letters to friends in England during the war as well as France and India and paints a picture of daily life in wartime Oxford. 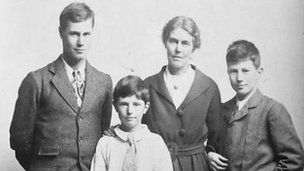 Violet brought up 3 sons during the war with her husband, Gilbert Slater who was the principal at Ruskin College at the start of the War. The War disrupted his position at the university and he took a job in India as a professor of economics at the University of Madras.

One of Violet's sons and Margaret's father, Owen, turned 18 during the war and served in the trenches.