During the war, publishing continued at Oxford University Press (OUP), including Oxford Pamphlets, Shakespeare’s England (produced to mark 300 years since Shakespeare’s death in 1916), and also some secret document printing on the behalf of British Naval intelligence (much of which still remains a mystery).

Original content and images kindly supplied by the Oxford University Press from their blog post OUP at war.

Watch Oxford University Press's video on how staff contributed to the war effort on the home front. 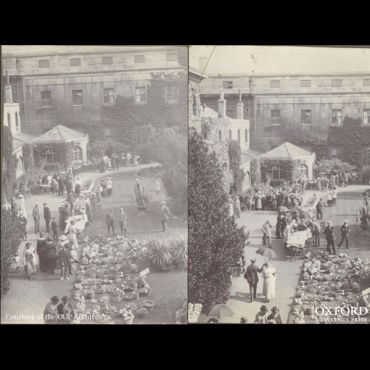 Flower and Vegetable Show in the Oxford quad
For more information: http://blog.oup.com/2014/04/oxford-university-press-during-world-war-i/

The very settled life of Oxford University Press was turned upside down at the outbreak of the First World War; 356 of the approximately 700 men that worked for the Press were conscribed, the majority in the first few months. The reduction of half of the workforce and the ever-present uncertainty of the return of friends and colleagues must have made the Press a very difficult place to work.

At the time, the man in charge of the Press was the Secretary Charles Cannan, and the Printer, responsible for the printing house, was Horace Hart (best remembered for Hart’s Rules). The steady dissolution of Hart’s workforce, made up of generations of men he had known for years from the close-knit community of Jericho, was thought to be too much for the Printer. He retired and sadly took his own life in 1916. Hart was succeeded by Frederick Hall, who served as Printer from 1915 to 1925. 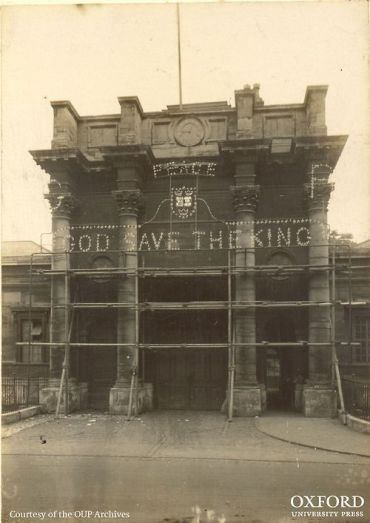 God Save the King sign erected at OUP Oxford
For more information: http://blog.oup.com/2014/04/oxford-university-press-during-world-war-i/

Women filled many of the gaps in the workforce, both on the print floor and in the offices. Previously, women could only be found in the bindery, and this change must have been revolutionary for all those who worked at the Press, men and women alike.

The remaining staff endeavoured to keep up a sense of community and morale; they started an annual Flower and Vegetable Show with produce they grew on the allotments allocated on the nearby Port Meadow. The growing of home produce was particularly essential to Britain after the German submarine blockades, which caused huge food shortages.

Repurposed with kind permission of the Oxford University Press.