Just 17 years after the official opening of Oxford’s present Town Hall building, it found itself being used for a very different purpose than what it had originally been designed for. Almost as soon as war broke out, the Town Hall became part of the 3rd Southern General Hospital.

Original content commissioned by Museum of Oxford and written by volunteer Peter Simpson with additional research by volunteer Brenda Jarman. 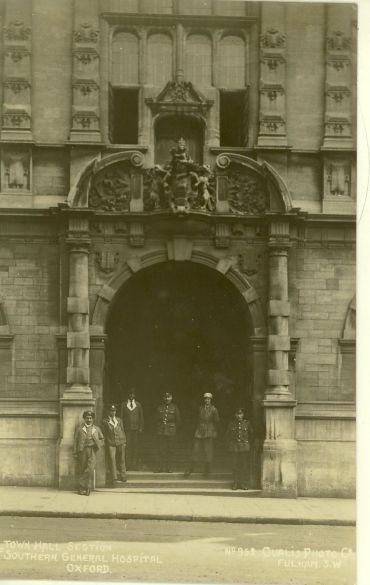 The first to open its doors as part of the hospital had been the Examination Schools on High Street in mid-August 1914. Indeed, the Town Hall initially stepped in as an additional venue for exams for the diminishing number of students left in Oxford. Other notable events included a mass recruitment meeting two weeks into the war in the Town Hall’s main hall. Eager to sign up and join the local regiment, over two thousand men turned up. Today, the main hall has a maximum capacity of four hundred.

However, by the autumn of 1914, the Town Hall Assembly Room was being used as overspill for wounded soldiers. By 1916, the Town Hall had entirely closed its two main function rooms – the Main Hall and the Assembly Room. These rooms and a number of other areas in the Town Hall became hospital wards which contained a total of 205 beds.

It seems that as the war went on, the Town Hall section of the 3rdSouthern General became dedicated to the treatment of soldiers suffering from malaria. Lord Kitchener took the decision to ship afflicted soldiers back to specialist hospitals in England such as Oxford Town Hall for long term convalescence.

Over the many months recuperating, soldiers would no doubt have become restless and, among other things, the Town Hall provided a large billiard table, gave lectures in the Court Room and even embroidery lessons. There was a large library in the building and sometimes the nearby New Theatre would send performers to the Town Hall to entertain them. 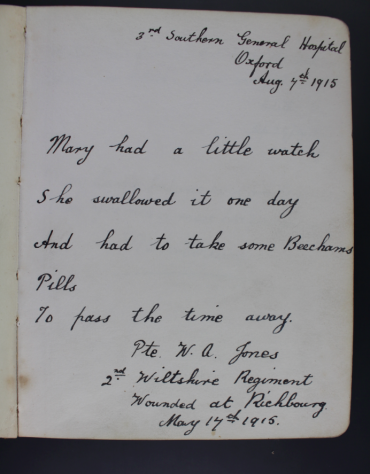 In the Town Hall today, there is a certificate recording the appreciation of the Army Council for the use of the building as a military hospital 1914-19.

An autograph book belonging to Lily Green, who worked at the Town Hall when it was part of the 3rd Southern General, can be viewed on the University of Oxford’s Oxford at War community collecting site. Find out more about how you can share your own World War One Oxford stories and memorabilia.