Like the rest of Oxford, Keble College was not unscathed by the effect of the First World War. Students became soldiers and the College became a barracks, home to 'C' Company of the No. 4 Officer Cadet Battalion. 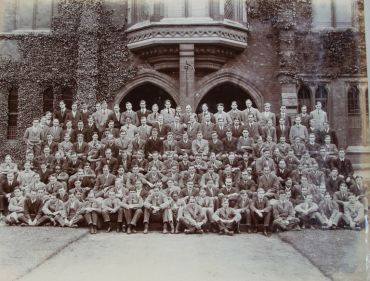 The outbreak of the War occurred during the Long Vacation of 1914 whilst many students and tutors were away from College. Yet the minutes of the first meeting of the returning College Council on 28 October 1914 show that the War was already making an impact. These minutes record that, during an earlier meeting, staff had been expressed the view that a cut in salary of 1/5th (including the salaries of the Warden, Bursar, Tutors and lecturers) would be appropriate. This was accepted by the Council who ‘placed upon record its high appreciation of the spirit which has prompted the offer.’ In the same meeting the Bursar announced that, on account of the War, he had postponed items of special expenditure agreed upon in the previous term. These cost efficiencies continued throughout the duration of the War: plans for new bathrooms and repairs to the organ were dropped. A portion of the Fellows’ Garden was converted into pigsties. The armoury of the former ‘F’ Company stored in a basement below the Bursary was lent to the Oxford University Officer Training Corps [O.U.O.T.C.] and the new bicycle shed was converted into a miniature shooting range. 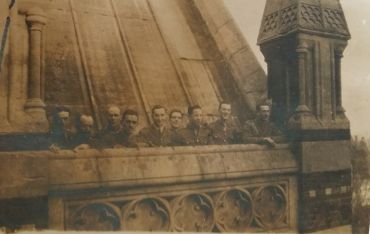 Cadets on the Chapel roof
For more information: http://www.keble.ox.ac.uk/about/past/keble-and-the-great-war

Several of the College Tutors entered war service: William (Billy) Henry Vincent Reade superintended Red Cross work in Egypt; Arthur Synge (‘Crab’) Owen worked in the Admiralty and Kenneth Kirk served as a Chaplain to the Forces. The recently graduated Lieutenant L. Rice-Oxley (1911) worked with the O.U.O.T.C.  to train the cadets based at Keble.

The number of new undergraduates fell dramatically during the course of the War; a total of just 45 matriculated between 1915 and 1918.

Despite the reduced number of undergraduates during the War the College was by no means quiet. Described as ‘a home of valiant men who have flocked in crowds to the War’ the College had become as much a barracks as a College. Formerly home to ‘F’ Company, the College was now home to a substantial proportion of ‘C’ Company of the O.U.O.T.C.

During the entire war period cadets or officers under instruction were resident at Keble (at one point up to 250). Further soldiers were frequently billeted in the Hall and Lecture Rooms, and the College became home of the 7th Battalion Oxford and Buckinghamshire Light Infantry for a time. Lessons were given to Belgian refugees in the Pusey Lecture Room.

In total 966 prospective, current and old members of Keble served in the War, and the losses were great. 25 students accepted for admission into Keble were killed prior to their matriculation; 22 students interrupted their studies to join the Military and Naval Forces, never to return; 124 Keble old members lost their lives during the course of the War; and a further three members of College staff were killed in action.

Original content and images by kind permission of the Warden and Fellows of Keble College, Oxford.