William Morris had a small and local car making business in Cowley, Oxford and was about to expand with a new model when war broke out in 1914. The outbreak of war threatened his business: his cars were too small to be used in the war, great swathes of his workforce had enlisted to serve and few people were thinking of buying a new car. But through innovation and perseverance he was able to transform his production plant for military supplies. 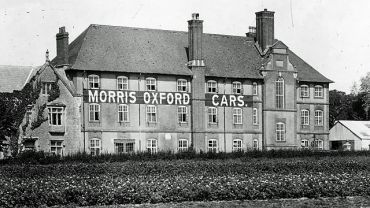 Morris' car production used an innovative method of assembling parts sourced externally and assembling vehicles on site. The downside of this was, come wartime, he had little manufacturing capability and adapting to making munitions - as many of his rivals did - wasn't straightforward.

In 1915, he got his first commission to make hand grenades, and shortly after another to make shell casings.

His big break came in 1916 with a contract for a new type of mechanised mine sinker which allowed mines to be laid at the correct depth - just below the surface of the water.

Early production by the Navy was producing just 20 a week. Morris promised 250, which rose to 2,000 a week by the end of the war.