“I live in an atmosphere of exhilaration, half delightful, half disturbing, wholly exciting.” Chronicle of Youth, Wednesday 14th October 1914.

More information on other Somerville undergraduates in time of war. 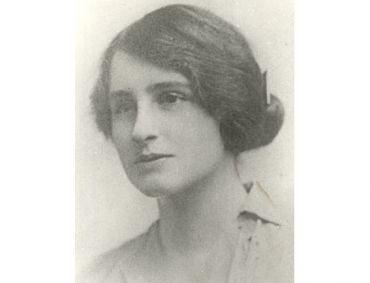 Vera Brittain was born in December 1893 in Newcastle-under-Lyme, Staffordshire, as daughter of a paper manufacturer. She was awarded an exhibition to Somerville College, Oxford, to study English Literature in 1914. She began a relationship with her brother's school friend, Roland Leighton, also due to start at Oxford in Michaelmas 1914.

When war broke out in August, both Roland and Vera's brother Edward applied to serve in the British army, meaning Roland never took up his place at Merton College but instead was sent to the Western Front with the 7th Worcestershire regiment. He and Vera became engaged while he was on leave in August 1915. During this period, Vera decided to leave Oxford for the duration of the War to become a nurse. She began nursing, in June 1915, at the Devonshire Hospital, Buxton, and, in November, transferred to a military hospital, the 1st London General Hospital in Camberwell, south-east London.

On 26 December 1915, while waiting at Brighton for Roland to arrive home on leave, Vera learned that he had been killed in France by a German sniper. She was working in the hospital in Camberwell when Edward, who had received his long-awaited commission in 1916, arrived to recover from wounds received on the first day of the Battle of the Somme in July 1916. 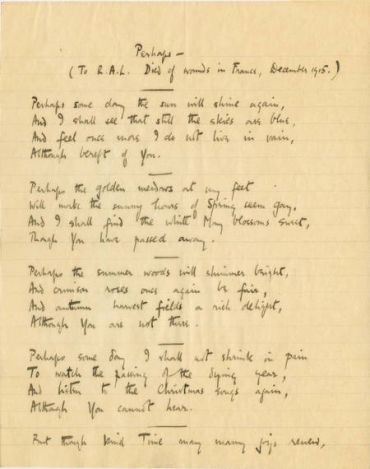 Perhaps some day the sun will shine again,

And I shall see that still the skies are blue,

And feel once more I do not live in vain,

Although bereft of you,

Perhaps some day I shall not shrink in pain

To watch the passing of the dying years,

And listen to the Christmas songs again,

Although you cannot hear

But though kind Time may many joys renew,

There is one greatest joy I shall not know,

Again, because my heart for loss of you

Was broken, long ago.

The digitised Vera Brittain material may be used for educational purposes only and remains the copyright at all times of the Literary Executors for the Vera Brittain Estate, 1970 and The Vera Brittain Fonds, McMaster University Library. In any distribution or display of the material this acknowledgment must be clearly indicated.