‘I used to talk of the Beauty of War; but it is only War in the abstract that is beautiful. Modern warfare is merely a trade...’ Letter to Vera Brittain, 2nd August 1915

The doomed love story of Roland Aubrey Leighton and Vera Brittain is as poignant reminder as any of the cost of the war.

See R. Leighton's full biography and digitized copies of his poems and manuscripts.

Roland was born in 1895, the son of Robert Leighton, a writer of boys' adventure stories, and Marie Connor Leighton, a prolific romance novelist. 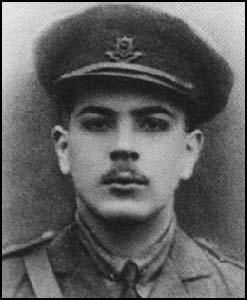 Roland Aubrey Leighton on a scholarship to Oxford in 1914

He studied at Uppingham School, where he met Edward Brittain and in 1913, age 19 he began 'courting' Edward's sister, Vera.

Instead of proceeding with his studies, Roland immediately volunteered for service and soon found himself in France. He and Vera became engaged on leave in August of the same year. From France Roland wrote Vera numerous letters discussing British society, the war, the purpose of scholarship and aesthetics, as well as their relationship, which she preserved in her diaries and later writings. Within his correspondence he also sent a limited number of poems.

On 23rd December 1915 Roland died of wounds in the Casualty Clearing Station at Louvencourt, France, having been shot through the stomach by a sniper while inspecting wire in the trenches at Hébuterne. He was 20 years old. 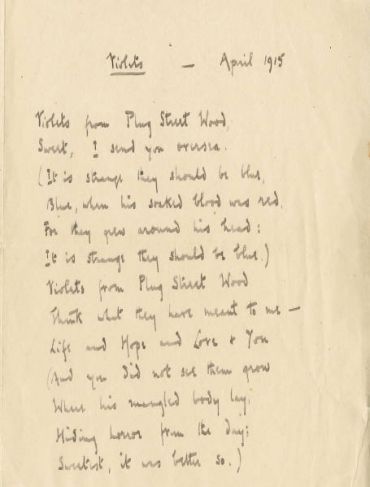 Think what they have meant to me -
Life and hope and Love and You
(and you did not see them grow
Where his mangled body lay
Hiding horrors from the day;
Sweetest, it was better so.)

Violets from oversea,
To your dear, far, forgetting land
These I send in memory
Knowing you will understand

The sunshine on the long white road
That ribboned down the hill,
The velvet clematis that clung
Around your window-sill
Are waiting for you still.

Again the shadowed pool shall break
In dimples at your feet,
And when the thrush sings in your wood,
Unknowing you may meet
Another stranger, Sweet.

And if he is not quite so old
As the boy you used to know,
And less proud, too, and worthier,
You may not let him go---
(And daisies are truer than passion-flowers)
It will be better so.