… I took to 'escapism': or really transforming experience into another form and symbol with Morgoth and Orcs and the Eldalie (representing beauty and grace of life and artefact) and so on; and it has stood me in good stead in many hard years since and I still draw on the conceptions then hammered out.

J R R Tolkien was in the middle of his studies in English Literature at Oxford university when the War broke out. He was able to defer enlisting until his degree was finished, when he joined the Oxford University Officer's Training Corps. It was at this time that Tolkien first began to write, expressing his feelings through his poetry for the first time. 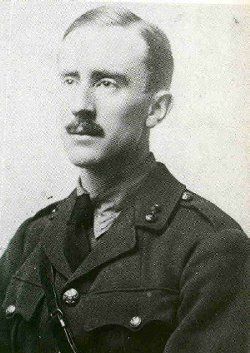 Tolkien's battalion was sent to France in June 1916, where he worked as a battalion signalling officer. The duties of this post was to keep senior Army strategists informed of the movements of men in the field. Later he was sent to the front and witnessed the Battle of the Somme.

Tolkien's description of the barren and evil land the hobbits pass over in their quest to reach Mordor has echoes familiar from the horrors of the trenches:

Dreadful as the Dead Marshes had been, and the arid moors of the Noman-lands, more loathsome by far was the country that the crawling day now slowly unveiled to his shrinking eyes. … Here nothing lived, not even the leprous growths that feed on rottenness. The gasping pools were choked with ash and crawling muds, sickly white and grey, as if the mountains had vomited the filth of their entrails on the lands about.

- The Two Towers, Book IV, Chapter 2: "The Passage of the Marshes"

Tolkien was undoubtedly influenced by his wartime experience, and the One Ring powerfully typifies the role of human greed in colossal suffering.