Joseph Wells was Wadham's newly elected Warden at the outbreak of War. In his role as warden, Joseph continued to publish the Wadham Gazette, sending it to Wadham servicemen along with letters and more practical gifts, like oil of birch for repelling flies. The Gazette and the hundreds of letters received by the Warden from serving Wadham men and their families, detail many very personal war stories.

Follow the progress of WW1 through extracts from the Wadham College Gazette, written by Warden Joseph Wells.

Wadham College Gazette, No 52, Michaelmas term, 1914
“The all-absorbing interest of this term has been the War. It is not only that so many members of the College are serving; it goes without saying that the life of those who have so far remained civilians has been profoundly modified. In the first place the numbers of the College were about halved; we had 57 up when we had expected about 105… Drilling became the main occupation of the term, and khaki was recognized as academical dress by the Vice-Chancellor’s special order. At Wadham, of course, as in all other colleges, organized games ceased… Wadham’s first name on the ‘Roll of Honour’ is that of Robert Horridge, who was killed at Ypres in November.” 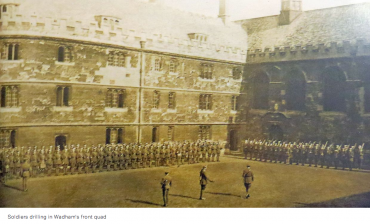 Wadham College Gazette, No 53 Hilary term, 1915
“The death roll of Wadham men is rather a heavy one, and contains the names of several who have served their College and their country long and well… Life at Oxford for those at present in residence is very different from the normal life of term. Every other man you meet is in uniform, and the main energy of the place is directed to drills, march-outs, physical exercises etc… Wadham like the rest of Oxford, has welcomed students whose nationality bars them from the call which has prevailed with our own countrymen. Hence it is pleasant to record that some fragments of the normal life survive.”

Wadham College Gazette, No.57, Summer term, 1916
“Our cook, who also attested under the Derby scheme, has been given exemption by the Local Tribunal, so long as the College continues to be a centre of military education. We are sure that all those in College, whether Wadham men or others, who are sustained by Mr Tuck’s skill, will agree that he could not possibly render his country better service than he is doing now.”

Wadham College Gazette, No.58, Michaelmas term, 1916
“The War has told heavily on our College during the last six months; our list of losses has been more than doubled. It is impossible to write as we feel about those who have fallen; they are of our very best, and it seems as if their places could never be filled. In view of the great sacrifice they have made, our life here seems very small and petty; yet we are sure that they and the thousands of Oxford men who are still at the Front, would have us keep things going. May we quote one of our men home last summer from one of the hottest parts of the line in France? He had only twenty four fours in Oxford, and he asked for nothing but to be left to sit in the quiet of the Garden and to drink in its beauty. Oxford is in France, at Salonica, on the Suez Canal, in Mesopotamia, on the High Seas; we who are left at home have to keep the old framework for their return… So far as our own College is concerned, our numbers are down to thirteen, of whom four are American Rhodes Scholars, two are representatives of the old Dutch families in Ceylon, and two come from the Far East, the Malay Peninsula. The five Englishmen have of course all been rejected from service. Were it not for our 150 officer cadets, Wadham would indeed be a place of solitude.” 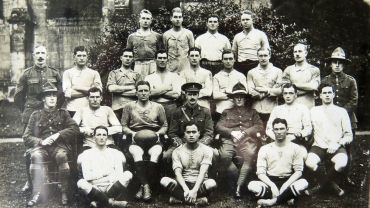 Wadham College Gazette, No. 63, Summer term 1918
“In view of the shortage of paper and of the increased cost of postage, it has been decided to issue the Wadham Gazette only twice a year, until the end of the war.”

Wadham College Gazette, No. 64, Michaelmas term, 1918
“Though the War cannot be called over, yet we all feel that it is now only a question before the formal Peace is made… Oxford is beginning to revive and Wadham with it. We had seven freshmen this term, compared with none in the October term of last year… ‘Students’ are to be demobilised at once. Steps have been taken to clear the College of Officer Cadets by the second week in January.

Wadham College Gazette, No 66, Michaelmas term, 1919
“The ‘reconstruction’ which has been promised everywhere, and which has been realized so rarely, has come to pass in the old Universities; they are both full to overflowing, fuller than they have been in living memory … at the end of 1918 we had 14 men up, this term we have had nearly 140. And the old life has come back with all its vigour. The return of the tide of young life to Oxford has naturally reminded us of those whom we shall never see again, those who by the sacrifice of themselves have saved Oxford and England for the generations to come.”