Professor Paul Aveyard studies behavioural medicine and looks at ways to encourage people to stop smoking. He's based in the Nuffield Department of Primary Care Health Sciences, above the Jericho Health Centre off Walton Street. The department describes itself as rethinking 'the way that healthcare is delivered to people, helping them to manage their own health… this improves patients' independence and well-being as well as dramatically reducing the cost to the NHS.' It’s an apt introduction to the Professor's work into the psychology of addiction and how to get people to quit smoking for good.

What is behavioural medicine?
'Behavioural medicine is the idea that for every condition, every treatment, every patient you can think of, there are aspects at work that are social, that are biological and that are psychological. So, if we are to make the best opportunities for early diagnosis, good treatment and effective rehabilitation, we need to integrate all those elements together to give our best to the patients.'

What brought you to behavioural medicine?
'I ended up in behavioural medicine by accident. I was working at the University of Birmingham, in a training post as a doctor at the time. I arrived when there was a public health initiative called Health of a Nation: the first time government had expressed public health goals. Under this initiative, they gave money to the West Midlands, where I was, to do some work on smoking research. I worked on this for a few years and during that time began to develop new ideas and apply for grant funding to delve further.'

What were the initial findings of your smoking research that made you think you’d like to pursue this further?
'Our research was, in a way, hugely disappointing. It was using computerized interventions (which were new back then, in the 90s) that tried to understand the way people were thinking about smoking and then help them inch forward towards the notion of stopping smoking. The idea was that, if you were not that interested in stopping, you needed to be made to think about it in the first place.

'We've since learnt that the notion that people creep towards a big decision like this is not true. People can make sudden and totally sincere commitments to stopping smoking that appear to arise spontaneously, without much in way of forethought. We have a set of competing motives: we smoke because we've always smoked, we smoke because we get something from it, or that when we stop smoking we feel bad, despite all our worries about money and health. Something can just trigger that tipping point.

'If we think about policy in that way, as opposed to inching people forwards, it leads to a set of actions that we now know are quite effective: for example, national no smoking day, Stoptober, or targeting people on New Year's Day. New Year's Day is not itself a national public health intervention, but when people stop at New Year, they are more successful than when they stop at any other time. Why is that? It’s the notion of making a resolution. People just need a prompt. That’s an example of our understanding of the psychology of what’s going on when people are making decisions, which in turn can lead to policy interventions.'

Would you say that more punitive government measures, like making people smoke outside, have little to no effect on someone’s willingness to stop smoking?
'No, they do have an effect. When the SmokeFree legislation came in, we saw that people stopped in advance of it coming in. The most punitive thing you can do is tax rises and yet we know that tax rises are the single biggest lever you can pull to change behaviour.
'People who don't smoke imagine people do it because they enjoy it. But most smokers don't enjoy smoking, they go on smoking in spite of a lack of enjoyment. But they go on doing it because of what I like to call a person’s "animal brain." The "animal brain" is the bit of the brain that exists below consciousness, that controls our appetites and drives of all kinds: sex, drugs, food. All of those drives are strong, inherent and preserved by evolution. This part of our psychology drives us to continue smoking.

'So if we understand that people find it very difficult to stop, even though they don't want to carry on but feel impelled to do so, we can also introduce policies to support them. For example, our network of smoking cessation, reimbursing medication to help people stop smoking – something most developed countries do not do.'

Do you think it’s also the "animal brain" that decides to stop smoking?
Not entirely, there’s definitely a rational component to it. When Richard Doll found out smoking is really bad for you – research which gained medical consensus in the early 1960s – from that time on, the numbers of smokers declined dramatically and continued to decline until it stabilised about 20 years ago. It does seem that simply telling people not to smoke is important.

'Now the "quit smoking" advertising that we see doesn’t appeal to rational decision-making: they show nice people getting cancer and fat globules dripping out of cigarettes. We know that those hard-hitting ads do drive people to try to stop, but they only do so if they are linked with a general awareness of a way out. You have to link the "why stop" with "how to stop".

Do you think the buzz around vaping and e-cigarettes is an issue? Traditionally the younger generation haven’t smoked as much as their parents, but this is quite a current issue. Do you think that’s going to be problematic?
'There's nothing I can remember that has divided the community of tobacco control research so much as e-cigarettes.

'What we know is that use of e-cigarettes is hugely common these days by smokers: the single most commonly used aid to stopping smoking – more than all of our efforts to push medication into people’s hands over the years, stop smoking services, advertising and GPs. Within a few years, the e-cigarette has taken off and meant that people are using it to stop, or reduce, their smoking in huge numbers. Insofar as you can tell from the data we have, this would appear to be an effective thing to do.
Nobody argues that’s not good. The worry that some people have is that it will have adverse consequences. For example, it will re-normalise smoking, because you see people puffing away in way that was dying out. Or it will act as a gateway, so young people will take up e-cigarettes. But the evidence so far is that young people do try them but they don't persistently use them. We see little evidence they are taking this up seriously.'

Since this interview was conducted the Nuffield Department of Primary Health Care at the University has released research to confirm that e-cigarettes help smokers stop.

Are there any health risks to e-cigarettes?
'Nobody knows for sure, but whatever those risks are – everybody is clear that it’s hugely less harmful than cigarettes.'

What would you like the legacy of all your research to be?
'I’d like to imagine we've created a wider variety of ways to stopping smoking than we currently have, and we have also helped people to cut down.

'We want to try to develop ways to capitalise on the good intention of potential quitters and lead more people to successfully stopping.

'One way we’re looking at, is to smoke on a timer. Let’s say you smoke 16 cigarettes a day. That would mean, on average, you smoked, every hour. On this method, you smoke every hour, on the hour. You have 5 minutes at the beginning of the hour to smoke, or not at all.

'Now the idea there is that the reason we smoke without thinking about it, if we are smokers, is that it’s cued. It’s cued by environments, by mood states. It happens in reaction to something. Typically people have very stereotyped times and places where they smoke - the habitual element of smoking. And when you do the timer method, you’re disrupting that learned association between the cue and the smoking. It’s a bit like Pavlov’s dogs: he linked the feeding with the bell, so that after a while, when the bell rang, the dogs salivated. Pavlov found that if you went on ringing the bell and not presenting food, the conditioned response disappears, and it's the same here.

'So, using what we know about our psychology and the way we learn, and what we know about how smoking is linked to times and places, we can begin to devise and then test programmes that will ultimately help people cut down successfully.'

Do you think there’s such a thing as an ‘addictive personality’? Do you think some people, for whatever reason, are more susceptible to addiction?
'Some people are. But it probably isn’t a helpful concept to call it an "addictive personality"; after all, one’s personality tends to feel set in stone. A common trait that underlies many behavioural issues is impulsiveness. We all have impulses to do this or that but most of us restrain them most of the time. An impulsive person has less ability to restrain themselves.
The importance of trying to frame it that way is that psychologists are finding there are ways to improve restraint. It should be possible to intervene and improve people’s ability to control their impulses.'

The next article follows up with Susan Jebb OBE, Professor of Diet and Population Health, to understand more about the psychology of obesity and losing weight. The western world is fatter than it’s ever been, we all know the health risks - so why is it so hard for so many of us to eat healthily?

The research discussed in this piece was funded by Cancer Research UK and the British Heart Foundation. 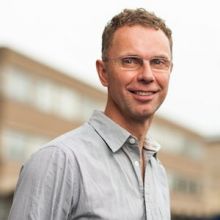 Paul Aveyard is Professor of Behavioural Medicine at the University of Oxford, a Fellow of Wolfson College and part of the Collaboration for Leadership in Applied Health Research and Care in Oxford.