The wider dissemination of Brecht’s works shows that they are as relevant as ever. 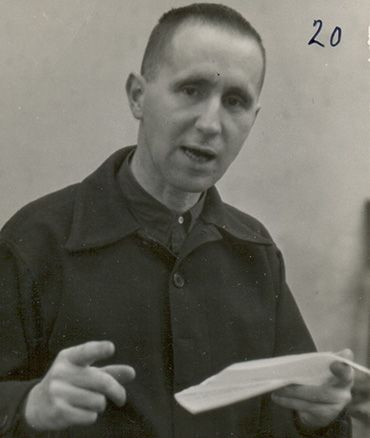 Brecht in London, 1936. (Used by permission of the Brecht Archive.)

A lifelong Marxist, Bertolt Brecht fled his native Germany in 1933 when Hitler came to power. By then an established playwright, Brecht went on to consolidate his reputation as one of the 20th century’s most important literary figures by producing consistently powerful plays until his death, aged 58, in 1956. Some fifty years on, his work endures thanks not only to its inherent quality but to the diligence and passion of Dr Tom Kuhn, lecturer in German and Fellow of St Hugh’s College, Oxford.

Dr Kuhn is a leading Brecht scholar and series editor, for Bloomsbury (Methuen Drama) and Norton, of the main English-language edition of Brecht’s works. He has no doubt that the author of works such as The Caucasian Chalk Circle, The Good Person of Szechwan and The Resistible Rise of Arturo Ui is as relevant as ever: “We live in the same world as Brecht. The problems he highlighted have not gone away. Brecht’s critique of the impact of advanced capitalism, and his views on war, conflict and ethnic differences, are as pertinent and insightful for contemporary audiences as they were in his own time.”

Brecht’s theories of theatre had a huge influence on later playwrights. He sought to strip a play of all that might seem obvious, that which could engender complacency in the audience. By having actors address the audience directly, as well other means by which the artifice of the theatrical event was foregrounded – harsh lighting, signs held up, audible stage directions and the like – Brecht aimed to make people think critically about the issues in his work. But, as Dr Kuhn says, his poetry is no less impressive.

“Brecht wrote poetry all his life but the considerable body of work he created is not as well-known as his plays,” says Dr Kuhn, whose other specialist interests include Kafka, Heine and the impact of music and art in literature. “The imbalance is undeserved: Brecht’s poetry is, by turns, tender, touching, dark and questioning, as well as direct and celebratory, challenging and combative.”

With fellow Brecht experts, including poet and academic David Constantine, theatre director Di Trevis and acclaimed composer Dominic Muldowney, Dr Kuhn has recently helped to popularise Brecht’s poetry with public performances, including a Poet in the City event and readings at the Southbank Centre and King’s Place in London. Further performances are planned, while meantime Dr Kuhn is working on a major Arts and Humanities Research Council-funded project, ‘Writing Brecht/Brecht into English’, on the cultural transmission of Brecht. This project will see the triennial conference of the International Brecht Society held in Oxford for the first time in 2016.

Moreover, with his team Dr Kuhn is also translating and editing major new volumes in the series, including material which has never before been available in English: Brecht on Theatre and Brecht on Performance (both November 2014), Love Poems (2014), The Business Affairs of Mr Julius Caesar (a historical novel) and Me-Ti (a book of aphorisms and short prose) (both 2016), The Collected Poems and The Writer’s Workshop: Dramatic Fragments (2018/19).

‘Feedback from Brecht and Steffin: Love in a Time of Exile and War, written by Tom Kuhn and David Constantine during the Poetry International Festival 2014, was exceptional. Many members of the audience wrote at length to tell us that their notions of Brecht and his importance in the contemporary world had been revolutionised. There is a real sea-change in Brecht’s standing in the UK and our understanding of the essential message of his work, and Tom Kuhn and his colleagues are at the forefront of this. Their staged readings are an excellent and impactful way to reach new and varied audiences and demonstrate Brecht’s relevance today.’