For more than thirty years Oxford geologist Dr Hugh Jenkyns has been researching what rock formations are likely to have produced oil and why. His findings have helped the oil industry when prospecting for new oilfields. Recent research has provided extra evidence that many oil fields are the ultimate result of intense global warming millions of years ago. 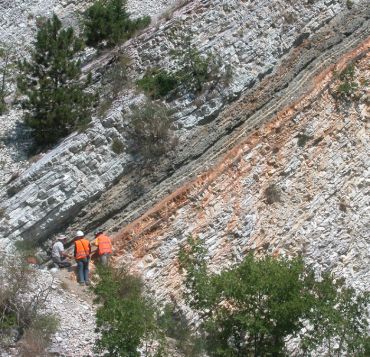 Research into what rock formations are likely to have produced oil and why.

In 1973, deep-sea drilling in the Pacific Ocean revealed the presence, hundreds of metres below the sea bed, of black organic-rich sediments similar in age to those found in Italy, in parts of the UK, and many other parts of the world. This discovery was important because these sediments represent so-called ‘source rocks', that is, rocks that are a source of oil. But more than that, the discovery suggested that source rocks are not distributed randomly in the Earth’s sedimentary strata but are linked to discrete periods of geological time.

Jenkyns and an American colleague, Seymour Schlanger, proposed that these unusual sediments were created during what they called an oceanic anoxic event (OAE), that is, an interval of geological time when the oceans and seas were low in oxygen, which therefore helped preserve the organic remains of plankton that had fallen through the water column to become buried under the sea floor.

The impact of the OAE hypothesis is that it offers oil companies additional insight into identifying potential source rocks when exploring new territory. So the risk of drilling and not finding oil – which can very easily happen – is reduced.

It is generally thought that OAEs occurred when release of large quantities of greenhouse gases from erupting volcanoes caused the Earth’s climate to overheat, precipitating local high rainfall with greater amounts of nutrients (plant food) entering the oceans to stimulate the growth of plankton. Recent research by Jenkyns and Professor Gideon Henderson has focused on calcium isotopes in OAE sediments in order to understand their chemistry. Their research confirmed the hypothesis that OAEs were associated with intense weathering of rocks on the continents due to high temperatures and abundant rainfall. This research gives us further data to identify the rock formations that still supply so much of the world’s energy needs.

‘Dr Jenkyns’ work on OAEs triggered a fundamental shift in the way oil companies view source rocks in terms of the importance of singular events versus uniform models. This paradigm shift led, within Shell, to us focusing the search for hydrocarbons on particular periods of geological time and geographies.’