The Oxford designed and developed T-SPOT.TB test accurately, efficiently and effectively diagnoses Tuberculosis with state of the art immunological techniques. 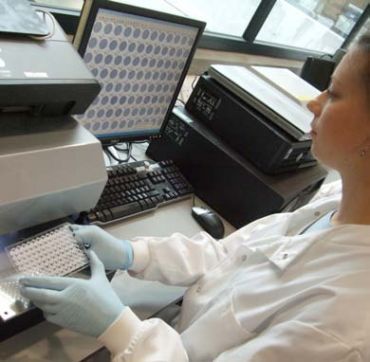 Tuberculosis (TB) is the second leading cause of death from an infectious disease, killing an estimated 1.5 million people worldwide each year.

In 1993, the World Health Organization declared tuberculosis to be a global health emergency, estimating that around 35 million people would die from TB between 2000 and 2020, if control measures were not significantly improved.

Although the tuberculin skin test (TST) has been the standard method of detecting TB infection for over 100 years, its inability to detect latent TB infection, and to differentiate between TB vaccination and infection has greatly affected diagnostic outcomes.

Responding to the World Health Organization’s declaration of emergency, Professor Adrian Hill and his team at the Nuffield Department of Medicine applied an ELISPOT testing method they had previously used in detecting malarial infection, to identify TB infected patients.

After performing clinical trials using this method, Professor Hill and his colleagues found that their “T-SPOT” test could diagnose TB-infected patients more rapidly, specifically and sensitively than TST. They also found that the T-SPOT was far more accurate in detecting TB in patients who had been vaccinated for TB, and in asymptomatic patients at a high risk of active infection.

Manufactured by Oxford Immunotec Ltd, the T-SPOT.TB test was commercially approved for sale in Europe in 2004, with sales increasing from just 2,000 in their first year to 500,000 in 2011.

The T-SPOT test has since brought accurate and effective TB testing to many new patient groups where the skin test had previously given poor or unreliable results. The commercial availability and superior diagnostic value of the T-SPOT test has also significantly impacted global health policy and guidelines, which now recommend the use of the T-SPOT test in a number of clinical situations.

Funded by: the Bill & Melinda Gates Foundation and the Foundation for the National Institutes of Health

‘Oxford Immunotec tests will redefine infection disease management over the coming decades, starting with TSPOT-TB, a test that is going to play a major role in eradicating tuberculosis. This test comes at a crucial time as TB is killing more people than ever before in history and is resurging throughout the world including the developed world.’