Four years’ research among South African smallholders has resulted in an argument for attention to local practices in the treatment of livestock diseases. 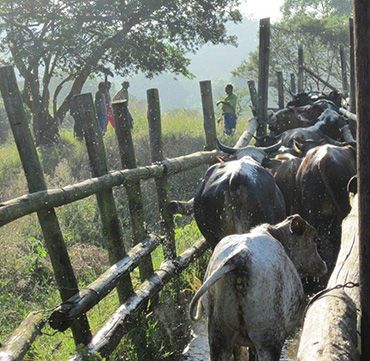 Cattle waiting at the dip.

As land reform in South Africa gathers pace, increasing numbers of livestock are owned by African smallholders. Their treatment of animals is often informed by traditional practices, such as the use of plant remedies, as well as supernatural ideas about animal health. Engagement at local level by two University of Oxford academics has enabled them to gain a detailed sense of African local knowledge and its interactions with biomedical approaches.

Dr Karen Brown, at the Wellcome Unit for the History of Medicine and Professor William Beinart, at the African Studies Centre and St Anthony’s College, conducted and analysed over 200 interviews with South African smallholders between 2008 and 2012. Ultimately, their research and findings have resonance beyond South Africa and into African rural communities as a whole.

A major finding is that despite prior governmentdriven veterinary interventions, there is little awareness in rural communities of the role that ticks play in carrying major diseases such as gallsickness and heartwater.

“We found that South African smallholders rely heavily on local knowledge to prevent and treat animal disease,” says Beinart. “But local knowledge is often fragmented and varies between communities. Treatments for livestock range from plant medicines to biomedicines and products such as motor oil.”

Beinart and Brown’s work has had a tangible impact on a number of levels. First, the very fact of undertaking their research meant talking to rural communities, and debating as well as recording local and scientific knowledge. After publication of their report, Outreach Report: African Local Knowledge: Livestock Diseases and Treatments in South Africa, in September 2012, Beinart and Brown returned to rural communities and gave presentations about their findings. This ‘bottom up’, rather than topdown, approach entailed working in five languages – English, Afrikaans, SeTswana, SeSotho and IsiXhosa. It also saw Beinart work with local vets and, in one village, Mbotyi, help organise a dipping day. Over 600 cattle were dipped in a few hours and on a subsequent visit it was found that dipping had continued with reasonable regularity.

In a post-apartheid era, some South African veterinary researchers, including members of South Africa’s Department of Agriculture and Rural Development, are more open to local knowledge and have started research on indigenous ideas and plant remedies. Beinart and Brown’s findings, laid out in their November 2013 book African Local Knowledge & Livestock Health – Diseases & Treatments in South Africa contribute to this initiative. Presentations have been made at Onderstepoort, the major veterinary science institution in South Africa, as well as to academic and government audiences in South Africa and at conferences and seminars in the UK, Europe, the US and Kenya.

Their methodology was predicated from the outset “on taking account of what local, rural people think”. It is an approach that has paid dividends, enhancing understanding and providing routes that might help state services and specialists connect better with rural communities. They believe this is essential in thinking about rural development more generally.

‘By incorporating cultural, scientific …and political perspectives, the authors succeed well in sculpting an authentic historical account of ticks … and the dynamics of control strategies and policies in South Africa. These perspectives serve to provide background rationalization to the implementation of relevant policies while their research on local knowledge in rural areas reveals the stark resource and knowledge divide … – an aspect in need of continuous urgent attention in future.‘