Research at Oxford is demonstrating how ordinary smartphones can be turned into cheap, simple devices to monitor climate and environment. 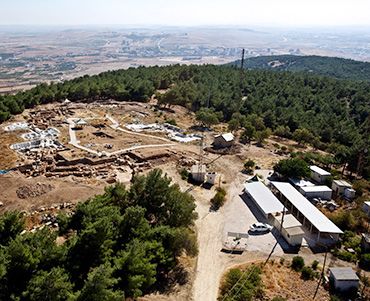 Smartphones have reduced dramatically in price and can now cost as little as £10 – but they are effectively sophisticated mini-computers with a range of high-tech built-in features that make them highly adaptable as monitoring devices. Their other great advantage is that they are immensely accessible: everyone knows how to use a smartphone app. Dr Russell Layberry of the Environmental Change Institute (ECI) has pioneered the use of smartphones to monitor energy usage, but he is now turning his attention to how they can be used in micro-climate and environmental monitoring.

A smartphone can be wired up to an inexpensive data-logger (a programmable microchip connected to an array of basic sensors) and used to monitor anything that can be converted into a voltage. To measure moisture content in rock, for instance, a voltage signal is passed from the phone’s headphone socket through the rock and back to the phone. Dry rock does not conduct electricity; wet rock, however, is a good conductor. The measured voltage therefore varies according to the degree of moisture, and gives a reading that indicates the moisture conditions of the rock.

The applications for this technology are extremely varied. Katrin Wilhelm, part of the Oxford Rock Breakdown Lab in the School of Geography and the Environment and a specialist in non-destructive investigation methods for heritage sites, is currently testing their use as remote environmental climate sensors on archaeological sites. Many ancient sites already suffer badly from deterioration caused by the weather, and climate change may be making these problems worse. Katrin has installed smartphone sensors designed by Russell Layberry at a remote archaeological excavation site in South Turkey, and is using them to monitor fluctuations in temperature, humidity and light levels.

The monitors are aptly named ‘Smart Stones’, since the plan is to disguise them as rocks to deter thieves and also to protect them from the elements. Micro-climate measurements are made every five seconds and collected via an app on the phone. They are then streamed to the lab in Oxford via the 3G network, providing extremely detailed data that can be analysed at a distance and used to inform practical conservation measures. The monitor is vastly cheaper than other systems, which can run into thousands of pounds, and the data is more reliable and accurate than data from local weather stations, which are often located too far away and at different altitudes. Smart Stones will soon be travelling to Pompeii, one of the most prestigious heritage sites in the world, where they will be used in a pilot programme as part of the Pompeii Sustainable Preservation Project.

Katrin is also engaged in a pilot project with the former home to George Washington’s ancestors, Sulgrave Manor in Northamptonshire. As a heritage site it displays a mixture of historic materials such as wooden furniture and textiles. Monitoring the micro-climate inside the building is key to their preservation, and smartphone monitors are being installed in one of the rooms at the Manor to enable this to be done. In the future the monitors could even be wired to switch dehumidifiers or heating systems on and off depending on the data readings, enabling indoor micro-climates to be controlled on a room by room basis. Until now, methods of doing this have been costly and prone to failure.

All kinds of other applications are possible. An art gallery is exploring the use of a light sensor attached to an adapted smartphone to automatically control the exposure of light-sensitive pictures and documents. Another potential use is in agriculture, where stored grain loses value if its moisture content is over a certain limit. The smartphone monitors could provide a cheap and easy way of checking when the grain’s moisture content is at an optimum level. Russell Layberry is also investigating the use of smartphones as air pollution monitors. Monitors of the kind installed in many city centres cost around £10,000 per year to install and run, but the actual sensor part may cost as little as a few pounds.

Smart Stone is powered by the phone’s battery but uses a tiny amount of power; coupled with a small solar panel, it’s estimated that it could be self-sufficient for up to 2 years, or until the battery breaks. The phones can even monitor their own battery levels, turning themselves on and off to save power and deciding how often to send data – effectively making them able to run indefinitely.

The next step is commercialisation. The research has attracted a NERC Pathfinder grant to investigate the commercial potential of the monitors, and it’s hoped that they will soon be out of the research lab and in to the streets, fields and buildings where they could make a world of difference.

“Understanding environmental climate impact on-site is key for sustainably managed archaeological excavation sites. The SmartStone climate datalogger is a useful device, easy to handle and reliable even under extreme weather conditions at our excavation site in South Turkey.”