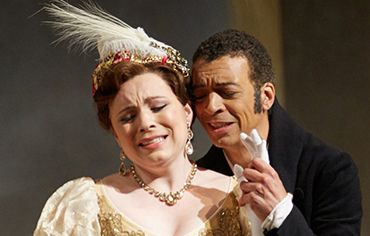 Pyotr Tchaikovsky’s Eugene Onegin, staged by Garsington Opera in summer 2016, was only the second foray into opera by its director, Sir Michael Boyd. The former Artistic Director of the Royal Shakespeare Company would bring to the opera a psychological depth typical of the theatrical, rather than the operatic, stage. So, too, would he draw on his career-long interest in Russian theatre. But it was in turning to Oxford Russianists Philip Bullock and Julie Curtis, that Boyd, his cast, and the conductor, Douglas Boyd (no relation), were able to layer the production with profound historical and linguistic resonance.

Julie Curtis, Professor of Russian Literature, was instrumental in helping both the production team and audiences consider the role of the novel in verse on which the opera is based: Aleksandr Pushkin’s Eugene Onegin. In both a pre-season talk and a feature for the 2016 Garsington programme, Julie provided an overview of Pushkin’s ambitious text; a product of the Romantic era and yet “an act of defiance against prevailing literary tastes in Russia”, full of parody, irony and wit.

Julie also provided both a full translation and a transliteration of the libretto. Published by Garsington in a 125-page booklet, her word-for-word analysis of the text and annotations enabled both cast and orchestra to express the nuances and flavour of the original Russian in which the production was performed.

Meanwhile, Philip Bullock, Professor of Russian Literature and Music, shone a light on Tchaikovsky’s dramaturgy, providing a talk to complement Julie’s lecture on Pushkin. “My aim was to encourage people to take seriously Tchaikovsky’s Onegin in its own right and to think about the subtlety of the libretto,” he explains. In a further talk, Philip gave an insight into how and why the composer chose to dramatize Eugene Onegin. He worked with the director and the conductor during rehearsals, adding historical justification to their decisions, and he contributed a feature on Tchaikovsky’s Onegin to the Garsington programme.

The professors’ contributions helped director and conductor reconcile the two texts. Sir Michael Boyd was able to see Tchaikovsky’s opera through Pushkin’s eyes and, in doing so, brought to audiences a production that remained faithful to the passionate and sincere spirit of Tchaikovsky’s opera, yet was enriched with Pushkin’s wry social observations. As The Spectator said in its review of the production, “Garsington understands Eugene Onegin better than Tchaikovsky did.”

Philip has been invited to return to Garsington in 2017 to provide a talk on the composer Claude Debussy.

Research funded by: Philip Bullock was able to assist Garsington Opera thanks to a Mid-Career Fellowship from the British Academy. Both he and Julie Curtis are senior researchers on Oxford’s £4 million AHRC-funded OWRI project, Creative Multilingualism, investigating languages and the creative arts.

‘Julie Curtis’s and Philip Bullock’s advice and knowledge on Tchaikovsky, Pushkin, Eugene Onegin, and indeed the Russian language was not only invaluable to me as the conductor of the opera, but was inspiring.’

‘I speak for all members of Garsington Opera when I say how very grateful we are to both Philip and Julie for their selfless dedication to this project. We were able to have world-class expertise at our fingertips and this helped us to deliver a celebrated and acclaimed new production of a Russian masterpiece. They are both such a pleasure to work with and we are indebted to them both for giving so willingly of their kindness and expertise.’