World-leading research in the Department of Physics the University of Oxford looks set to deliver low-cost, high-efficiency photovoltaic technology that could finally rival energy generation from fossil fuels. 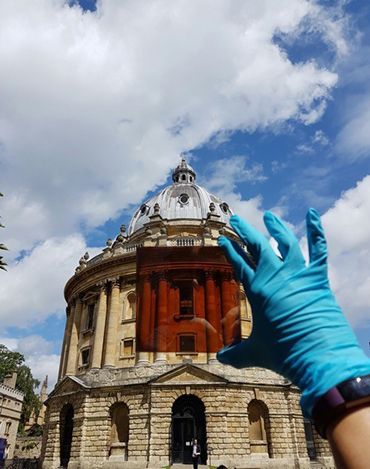 Large area solution processed perovskite thin film for photovoltaics.
The market for solar photovoltaics (PV) has expanded greatly in recent years, but its contribution to world energy is still small and the technology more expensive than fossil fuels. Silicon, used in virtually all commercial solar cells, is cheap and abundant, but it is costly and energy-intensive to produce it in the pure crystalline form required for PV. For solar power to really replace fossil fuels across the globe, the technology needs to become even cheaper, probably about ¼ of the current price, and more efficient still.

Cutting-edge research led by Professor Henry Snaith at the University of Oxford looks set to deliver exactly this: low-cost, high-efficiency PV technology, based on a crystalline material called perovskite synthesized from earth-abundant precursors, which began to be investigated in 2009 as a material to replace the dye in “dye-sensitized” solar cells. However, a dramatic breakthrough came in 2012 when the Snaith group demonstrated that perovskite was, by itself, an excellent semiconductor. This unexpected result meant that PV cells could be built with a simple stack of thin layers, and this had the potential to simplify manufacture enormously, and deliver much enhanced efficiency.

By 2014, cells made by the group had achieved efficiencies of over 17%, approaching that of commercial silicon modules, and now single junction perovskite cells have surpassed 22%. Commentators described this rapid progress as ‘unprecedented’. One of perovskite’s great advantages is that it is cheap to synthesise, and high-quality films can be processed from solution at low temperatures, making it compatible with existing simple manufacturing techniques for large area printing. The commercial potential is being realised through spin-out company Oxford Photovoltaics Ltd, meaning that the technology could soon be available on the market.

Perovskite’s structure can easily be ‘tweaked’ to create a material that can absorb any frequency of visible light. This is a key benefit; silicon can only absorb light within a set range of wavelengths, which puts a limit on its efficiency.

Capitalising upon this “tune-ability” the Snaith group have recently demonstrated how perovskite could be combined with Si in a “tandem” solar cell, paving the way to deliver solar cells with efficiency much greater than 25%.

The importance of this work has not gone unnoticed. Nature Magazine declared Henry Snaith to be one of the ten most important people of 2013 worldwide in all science, and in 2015 he came second on Thomson Reuters’ list of the most influential scientific minds. The group’s work is likely to have far-reaching consequences for the use of PV as a low cost renewable source of future energy.

‘The solar power market continues to grow more rapidly than expected. Our proprietary technology [based on the research of the Snaith group] has the potential to revolutionise this exciting but competitive market and allow Solar to become the future mainstream fuel source for electricity.’