Dr Annette Idler and colleagues are working on new approaches to understanding conflict and building peace.

Dr Idler was the winner in the ‘Early Career’ category, and highly commended in the ‘Inspiring Leadership’ category, of the Vice Chancellor Innovation Awards 2020 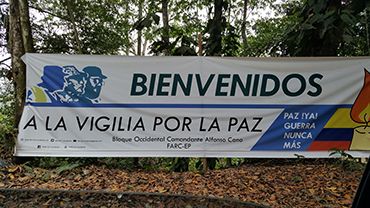 IDLER Rethinking Conflict Building Peace - (Credit) Annette Idler
Around two billion of the world’s population are affected by conflict, violence, and fragility. War and insecurity cost lives, displace communities, and hinder social and economic development. Above all the experience or fear of conflict impacts the lives of millions of people every day.

Idler’s work analyses armed conflict and the way it is likely to develop and change over time and in different geographical contexts. Her project teams also bring stakeholders in conflict-affected areas together to help build strategies for peace.

Unlike much established conflict analysis, the ‘Changing Character of Conflict Platform’ uses a multi-disciplinary approach which considers not only quantitative information by drawing on disciplines such as political and complexity science (how many people affected, what is the economic cost, how can we forecast trends, etc) but qualitative evidence from a range of subjects and approaches including history, visual arts, and ethnographic methods to better understand people’s everyday experience.

Key to the approach are both understanding the cross-border nature of conflict and how conflict changes over time. “The idea that most conflict is between states or located in one country is inaccurate,” explains Idler. “Much of it is perpetuated by groups that don’t represent any state and operate opportunistically in different territories. It’s also important to understand not only what is happening in a conflict now, but the emerging political, economic and social factors that might affect it in the future.”

“History gives us some useful lessons here,” she continues. “The Thirty Years War (a 17th-century conflict fought mainly in central Europe) shows us how different interest groups could perpetuate conflict over a wide geographical area and extended time period – with frequently changing alliances, objectives, and power balances. The War may have been 400 years ago but provides useful insights into some of the complex conflicts of the 21st century!”

In addition to academic outputs such as journal articles and her monograph Borderland Battles, Idler’s research has resulted in a range of open access tools and products. A dynamic conflict analysis tool has been developed with the UN Staff System College and is now embedded in UN practice. Other tools include best practices guides for civil society organisations, data analysis software, podcasts and interactive online visualisations.

“These groups wouldn’t normally have the opportunity to get together,” says Idler. “Bringing them into the same space builds trust and narrows the distance between them. Officials can see that communities have rational, well-articulated ideas about what security means to them, and communities can get their voices heard in international policy debates.”

Beyond Colombia, Idler’s research and analysis is widely valued by governments and humanitarian agencies. The US, UK, Canadian, and German governments regularly request briefings about her research, and UN agencies, NATO, EU, and Europol regularly seek her advice. Idler has also collaborated with NGOs including International Alert in Myanmar and the Danish Demining Group office in the Horn of Africa.

“It’s very gratifying to see that these research programmes are having a positive practical impact in conflict contexts,” says Idler. “Developing robust analytical tools in this field is really important, but peace building requires diverse narratives and voices to join the dialogue to make progress. Enabling those affected by conflict to access information, express their views, and contribute to solutions is what motivates us.”

Dr Annette Idler is the Director of Studies at the University of Oxford’s Changing Character of War Centre, and Senior Research Fellow at Pembroke College and the Department of Politics and International Relations. She is also Visiting Scholar at Harvard University’s Weatherhead Center for International Affairs.

“CONPEACE has allowed us to see many scenarios in which we were merely victims of violence in a different light; now that we have a voice, we can see the possibility to make a change!”