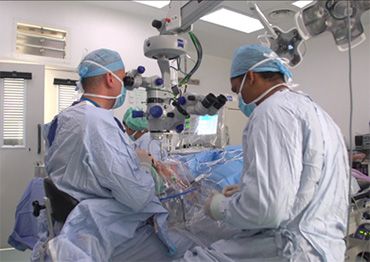 Choroideraemia is a genetic condition which affects the eyesight of 1 in 50,000 people. While those numbers sound small, the problem is dramatic for the patients it affects: usually identified in late childhood, diagnosis brings with it the promise of a dramatic and unavoidable decline in vision. Patients initially struggle to see in low-light conditions, but sight gradually declines until most sufferers lose their eyesight completely by the time they reach middle age. Worst of all, there is no treatment.

Now, though, a team of researchers led by Professor Robert MacLaren of the Nuffield Laboratory of Ophthalmology has developed a solution. He and his team were aware that the condition is caused by an inherited faulty gene, known as CHM. Without a functioning copy of the gene, cells on the retina — which detect light — slowly die, causing deterioration in eyesight with time.

The team’s solution sounds simple: in order to stop the cells from dying, inject working copies of the gene into them. But as with most simple-sounding ideas, the reality was rather more complex. When the team first proposed the treatment, nobody had ever tried to correct a genetic condition such as this by injecting genes into the back of the eye.

So Professor MacLaren and his team embarked on a small-scale trial at the John Radcliffe Hospital, in order to test whether their theory worked in practice. Over the course of a year, the treatment was performed on six patients with promising results. Just as importantly, there have been no adverse side effects, either.

Their successes to date suggest the treatment could work effectively for many sufferers of Choroideraemia. That’s why Professor MacLaren is now planning to develop the research into a second phase, academically led clinical trial, with the hope of developing the concept into a widely used treatment over the coming years.

Funded by: Wellcome Trust, the Medical Research Council and the National Institute for Health Research.

‘I assessed the risks [of the treatment] and decided they were worth taking, both for me and for all the other people who have the problem. [Now] I look at my wife’s mobile phone and am able to identify all the digital letters – I gave her my mobile phone with small digital letters four years ago because I could not read it any more.’