Oxford’s Griffith Institute plays a key role in the creation of a facsimile of Tutankhamun’s tomb. 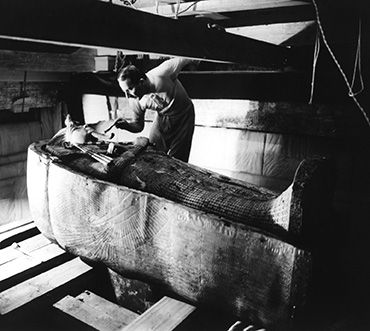 The British archaeologist Howard Carter in the tomb of Tutankhamun.

Ever since its discovery in 1922 by the British archaeologist Howard Carter, the tomb of Tutankhamun, an 18th Dynasty Egyptian pharaoh (14th century BC), has cast a spell around the world. An extraordinary number of people have visited the original 3,400-year-old burial chamber, drawn by a heady mix of historical resonance, the remarkably intact contents of the tomb and no little by way of 20th century myth-making. The tomb continues to receive up to 1,000 visitors a day, but whether respect for antiquity or a belief in pharaoh’s curses is the draw, the pressure wrought by modern tourism on a space which is just 60m square is obvious.

But now, thanks to a collaboration in which Oxford’s Griffith Institute played a key role, a facsimile of the tomb has been created. On its opening on 30 April 2014, the facsimile was deemed to be so accurate that some of the Tutankhamun experts, Egyptologists and dignitaries who were present burst into tears.

Professor Richard B. Parkinson, Professor of Egyptology at the University of Oxford, is one of the directors of the Griffith Institute. The Institute was established in 1939 as the centre for Egyptology at Oxford, in honour of Francis Llewellyn Griffith, Oxford’s first Egyptology professor. Professor Parkinson believes that the man whose legacy allowed for the creation of a “permanent home or institute for the study of the ancient languages and antiquities of the Near East” would be delighted by the facsimile of Tutankhamun’s tomb.

“Francis Griffith was a great Egyptologist, who was described by The Times after his death as a ‘genius’,” says Professor Parkinson. “His dream was to disseminate as much information as possible about ancient Egypt, and to maintain the highest standards of research and expertise in Egyptology. He would be very proud of the way in which the institute that bears his name contributed to the creation of the facsimile.”

The facsimile is the product of a collaboration among The Friends of the Royal Tombs of Egypt (a Swiss foundation), The Factum Foundation for Digital Technology in Conservation (a Spanish foundation) and Factum Arte, a company which specialises in digital mediation – both in the production of works for contemporary artists and in the production of facsimiles as part of a coherent approach to preservation and dissemination. Factum Arte made the Tutankhamun facsimile with help from the Griffith Institute, which, as well as providing general advice, supplied a high resolution file of a photograph taken by Harry Burton of now missing fragments which were removed from the south wall of Tutankhamun’s burial chamber to allow the chamber to be entered and cleared. Thanks to this unique historic image, an exact reproduction of the entire tomb was possible.

“Francis Griffith instigated a research project to catalogue inscriptions from every site in Egypt, known as the Topographical Bibliography of Ancient Egyptian Hieroglyphic Texts, Reliefs and Paintings, which is still edited and kept up to date by the Griffith Institute to this day,” says Professor Parkinson. “This and other archive material was essential in creating the facsimile. Its design and craftsmanship is something that commands huge respect. It gives the lie to trivial fantasies about mummies’ curses and the like, and instead gives people a sense of the human reality of ancient Egypt. It reveals a culture with similar preoccupations and problems to ours – a vision of a shared humanity that lies at the heart of Oxford Egyptology in all its teaching and research.”

Funded by: The Griffith Institute and Factum Arte

‘The Griffith Institute is proof of the importance of documentation and research – new insights are constantly being made as a result of the well organised archive and the extraordinary quality of Carter’s drawings and Burton’s photographs. Factum Arte is proud to be continuing this work, documenting the tomb using new technologies and working with the team at the Griffith to ensure that the tomb survives for future generations to experience and understand. It was built to last for eternity but not to be visited. The pharaonic craftsmen did a remarkable job but the tomb cannot withstand the dynamic environment caused by the visitors who flock to share in its celebrity.’