The Blackfoot people of Northern America have reconnected with a key element of their heritage thanks to a unique relationship between the Blackfoot Confederacy and the Pitt Rivers Museum at the University of Oxford. 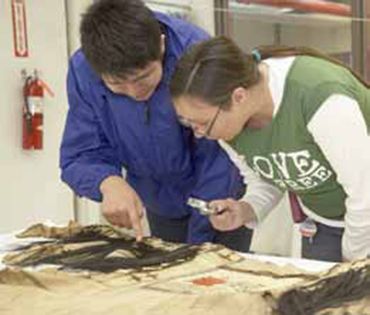 The collaboration between the University of Oxford and Blackfoot people has reinvigorated cultural practices that were almost lost and revealed better understanding of important heritage objects—men’s war shirts, decorated with scalplocks and porcupine quillwork—in Blackfoot culture. The Blackfoot Confederacy includes three indigenous First Nations in Alberta and one Native American tribe in Montana. Some 50,000 people now live in these tribes.

Blackfoot shirts with scalplock decoration are sacred objects, and it is a great honour to wear one. The right to wear such shirts was traditionally bestowed in ceremony, but this tradition was on the brink of extinction following the removal of the shirts by collectors and government assimilation policies in the late 19th and early 20th centuries.

Five Blackfoot shirts, acquired as diplomatic gifts in 1841, were donated to the Pitt Rivers Museum in 1893. Most Blackfoot people have never seen such early historic items. At the request of tribal elders who wanted to revive traditional practices associated with the shirts, a research project was undertaken to explore the cultural history and contemporary meanings of the shirts.

Dr Laura Peers at the Pitt Rivers Museum, in collaboration with Dr Alison Brown at the University of Aberdeen, ran a series of workshops in Alberta allowing elders, ceremonialists, artists, teachers and high school students to handle the shirts. Many participants burst into tears at the first sight of the shirts, feeling the beauty and strength of their ancestors. Handling the shirts triggered learning and the transfer of cultural knowledge across generations, and a class of Blackfoot high school students began to learn the nearly extinct arts of traditional hide tanning and porcupine quillwork.

Dressmaking patterns based on one of the shirts were given to Blackfoot seamstresses to support the making of new shirts. As a direct result of the project, and for the first time in decades, two ceremonies were held to transfer the right to own hair lock shirts to Blackfoot men. Without access to the historic shirts from the Pitt Rivers Museum, it is unlikely that these ceremonies would have ever taken place.

Funded by: Arts and Humanities Research Council and the University of Oxford John Fell Research Fund.