As the climate changes, diseases carried by insects and ticks are spreading northwards. Mapping techniques from the Department of Zoology provide detailed information for health authorities, economists and the general public about changing disease risks. 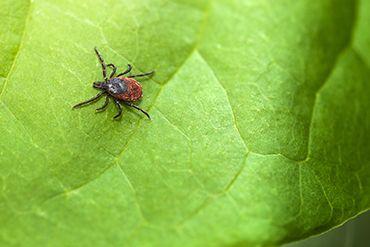 Ixodes ricinus, the castor bean tick.
About 1 in 6 of the world’s infectious diseases are vector-borne, including those transmitted to people and livestock by insect or tick bites. Many are serious, lack effective vaccines or treatments, and can have a devastating impact on human and animal health. Tropical countries are worst affected, but the geographical range of vectors that carry serious disease is spreading as a result of increasing temperatures and trade movements.

How can we track the spread? Which new diseases might affect Europe over the coming years, and what kind of action should we be taking? The Department of Zoology has a long track record of increasingly sophisticated modelling and mapping techniques which help to answer questions like these. In the 1990s Professors David Rogers and Sarah Randolph were pioneers in mapping vector-borne diseases, and their techniques have been built on by many other researchers since.

One of them is Dr William Wint, who specialises in creating models that can predict the distribution and spread of disease vectors, particularly in Europe. The starting point is to collect data about where vectors are definitely present (or absent), and factor in anything that might affect these distributions – satellite data on rainfall and temperature, human population density, type of habitat and so on. The model is then able to fill in the blanks on the map where there are no data, and predict what will happen as conditions change. The results can be used to inform strategic planning for disease control, and also to generate detailed information about the economic impacts of human and animal diseases.

Dr Wint’s research has made a key contribution to LymeApp, a Scotland-based service which provides information about Lyme disease via an app and web portal. The disease is transmitted by tick bites, and if not treated promptly and appropriately can lead to severe long-term symptoms. Reflecting the northward spread of ticks in Europe as well as better detection, there are now several thousand cases of Lyme disease reported in Scotland every year. Walkers and people working outdoors are particularly at risk.

The app uses GPS to identify a user’s location. Combining this with data about the location’s height, climate and habitat enables the app to predict how common ticks are in that area, so that users can take appropriate precautions to avoid being bitten.  The app also links to NHS-approved advice on what action to take if they are bitten. It is hoped to extend LymeApp to England and other European countries – just one example of the way in which accurate mapping of vector-borne diseases can lead to real-world benefits.

'We have relied on William Wint’s longstanding experience and expertise with vector mapping to both help frame our project and facilitate many aspects of the tick distribution modelling process.'