Should social media be controlled, and if so how? Researchers in the Department of Computer Science are working to find the best ways to prevent provocative online content spreading out of control. 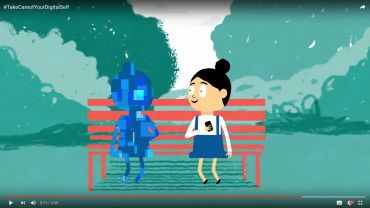 An image from Digital Wildfire’s YouTube video, aimed at 9 to 13 year olds, who are likely to be starting to use social media.
The ever-increasing popularity of social media platforms such as Facebook, Instagram, Snapchat and Twitter brings many benefits, but there are risks too – especially the risk of ‘digital wildfires’ in which provocative content spreads rapidly out of control. Rumours, false information, deliberately malicious campaigns or even innocent online posts that are misinterpreted can all cause serious harm, and damage the reputation and well-being of individuals, groups or entire communities. Given these dangers, how should social media be regulated, and by whom?

Researchers on the Digital Wildfires project in the Department of Computer Science have focused their attention on this central question. Should the police and legal system take more interest in what is posted on social media, or should social media companies do more to limit the spread of provocative content? What should individuals do to ensure they post responsibly? What about rights to freedom of speech?

The Digital Wildfires project team is led Marina Jirotka, Professor of Human Centred Computing at the University of Oxford, and includes other researchers from the Universities of Oxford, Warwick, Cardiff and De Montfort. This collaborative team of computer scientists and social scientists analyses social media datasets to assess how provocative content spreads across social media and to identify forms of ‘self-governance’ through which social media users can manage their own and others’ online behaviours. The project also draws on the perspectives of other key players such as social media companies, legislators, the police, civil liberties groups and educators.

Recognising that children and teenagers are particularly vulnerable to harm through the use of social media the team has spent a lot of time working with schools and engaging with young people. They have run a youth panel asking ‘What makes a good digital citizen on social media?’ and developed a set of learning materials for use in schools. These materials promote digital maturity, risk awareness, responsibility and resilience among young people. They include a video animation aimed at 9 to 13 year olds – who are likely to be exploring or starting to use social media – which promotes the core message: #TakeCareOfYourDigitalSelf.

Ultimately, the project will produce a number of outputs to help social media users and other key players to understand the issues surrounding digital wildfires, including an online toolkit that can be used as an aid to decision making about social media posts and their possible consequences. Professor Jirotka has been appointed as specialist advisor to the House of Lords Select Committee on Communications for their enquiry into Children and the Internet, reflecting the importance of this project.

Research funded by: ESRC with additional sponsorship from Santander Universities.

‘We see e-safety as a vital aspect of our safeguarding and are delighted that students from our school have been able to take part in this Oxford University project.’