Engineers at Oxford have made key improvements to the design of cryocoolers, an important cooling component of satellites, thereby contributing to many successful satellite missions and to reduced launch costs. 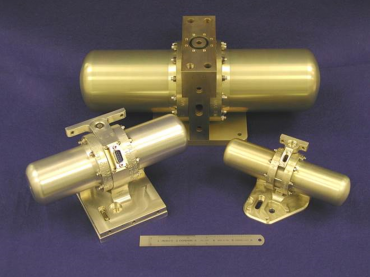 Cryocooler compressors from the collaboration between Oxford, Honeywell Hymatic and NGAS.
There are over 1000 functioning satellites in earth orbit and many more are launched each year. They underpin aspects of modern life that we now take for granted: global telecommunications; GPS and mapping; monitoring climate, weather, oceans and earthquakes; tracking space debris and meteorites; military surveillance; and observing our solar system and the universe beyond.

Satellites may be essential in the 21st century, but they are not cheap either to build or to send into space. Launch costs are enormous – around $20,000 per kilogram. In this context, reducing the mass of any of the satellite’s components represents huge savings.

Researchers in the Department of Engineering Science have been working for over 35 years to improve the compressors that form a key component of satellites’ cryocoolers (effectively miniature refrigerators). These cool the infra-red sensors that are vital to a wide range of satellite applications, increasing sensitivity and reducing interference. Cryocoolers and their components must be reliable, efficient, long-life, compact, lightweight, and have low vibration (since vibration can harm optical measurements).

Oxford’s compressors meet all these criteria, and now lead the field. The third-generation compressor launched in 1997 led to a cryocooler that was smaller and at least 16% more efficient than any other available device. It also benefited from significantly reduced vibration and was easier to manufacture. Because of its increased efficiency, smaller solar arrays were needed to power it, further reducing costs.

The compressor has been a major economic success for the companies involved in its manufacture. By 2018, 84 compressor units had been sold by UK firm Honeywell Hymatic, with sales totalling around £7.4M. At 12kg lighter than anything else on the market, the cryocoolers that incorporate the Oxford compressors have trimmed around $250,000 from the launch cost of each satellite mission they have been used on.

Now the European Space Agency is playing a key role in developing the Mid Infra-Red Instrument (MIRI) for the James Webb Space Telescope (JWST), due to launch in 2021. JWST is the successor to NASA’s Hubble Space Telescope, and will be the most powerful space telescope ever built. At the heart of MIRI will be a cryocooler with a specialised version of the Oxford compressor which can cool to just a few degrees above absolute zero – an exceptional level of cooling which will contribute to the massive increase in performance that JWST promises.

'This product line is a significant part of our business, and we anticipate that it, and future related products, will continue to be an increasing part of our strategic business model for years to come.'

Engineering Manager at Honeywell Hymatic, who manufacture the Oxford-designed compressors for incorporation into cryocoolers.