Dr Nic Cheeseman, Hugh Price Fellow in African Politics, has advised the UK government and World Bank on free and fair elections in Kenya and Zambia. 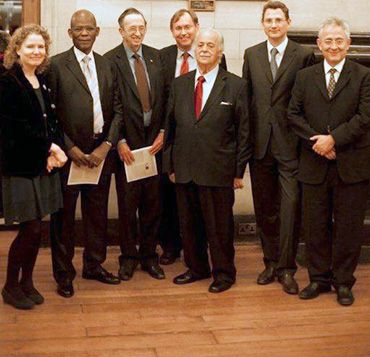 Electoral violence is the scourge of democracy – especially in countries whose embrace of democracy is transitional at best, fragile at worst. But research undertaken by Dr Nic Cheeseman of Jesus College has helped international donors understand how they can best reduce the likelihood of violence in African elections. So, too, has it played a key role in fostering free and fair elections, enabling the UK government to promote democracy abroad and African nations to operate in a more transparent and peaceful way.

Dr Cheeseman, Hugh Price Fellow in African Politics, has worked in the field of comparative politics – with a focus on sub-Saharan Africa and the process of democratization – since 2008. His research has been animated by two core preoccupations: how elections lead to violence, and how political systems can be designed to promote more accountable, responsive and effective government.

Widely published, in the Daily Nation (East and Central Africa’s highest-selling newspaper), academic journals and other media including radio and television, Dr Cheeseman is known as a leading authority on the complex issues underpinning African politics. His analysis of the conditions under which politics becomes more ‘programmatic’ and policy-based is informed by direct experience and analysis. Many of his other findings – for example, with regard to violence and patronage in Kenya – have not only been critically acclaimed but have made a tangible difference on the ground.

In Kenya, Dr Cheeseman’s research shaped the UK government’s approach to the country’s 2013 elections. Dr Cheeseman led a team of academics in an ‘Early Warning and Long-term Monitoring’ Project for the Department for International Development (DfID), Foreign Office and Ministry of Defence, which, by identifying potential new locations of conflict and electoral malpractice helped the UK government to anticipate violence and design interventions accordingly. Prior to this, Dr Cheeseman’s work had already helped shape the findings of the Kriegler Commission, whose report on the controversial elections of 2007 led to the restructuring of the Kenyan electoral commission.

In Zambia, Dr Cheeseman’s advice again made a contribution to the struggle for democracy. A number of his proposals were adopted by DfID, including creating scorecards of MPs’ performances, funding community radio, and promoting investigative journalism, the effect of which will be to provide improved information about politicians and the political process to voters so that they can hold their representatives accountable. He also provided advice to the World Bank on how to engage most effectively with the new government.

Dr Cheeseman continues to help promote democracy in Africa and, having pioneered the use of academics to provide long-term election monitoring in Kenya, has been asked by the United Nations Development Programme to lead a similar project to cover the Nigerian elections of 2015.

Funded by: The African Conflict Prevention Pool of the UK government and The Economic and Social Research Council.

‘During this work [on the Kriegler Commission] it was very useful for me – but also for the Commission Chair, Judge Johann Kriegler – to have access to the special issue of the Journal of Eastern African Studies of which Dr Cheeseman was a guest editor. The content of this issue of the journal contributed substantially to our understanding of the entire situation … and helped us to formulate some of the many complicated questions we had to look into.’

Jorgen Elklitt, the Secretary of the Kriegler Commission