Research carried out at the University of Oxford has helped to demonstrate the extraordinary significance of a fossil site in China for understanding evolution at the time of the Cambrian explosion, culminating in its designation as a UNESCO World Heritage site in 2012. 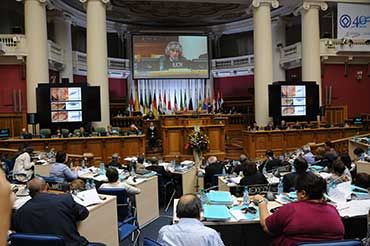 UNESCO meeting, St Petersburg, which ratified World Heritage status for Chengjiang
There are very few sites worldwide where soft-bodied creatures have been preserved as fossils, and fewer still which happen to represent a time of major evolutionary change. One site that fulfils these rare criteria is at Chengjiang in Yunnan Province, China. Discovered in 1984, Chengjiang’s fossils open up a window on the Cambrian explosion around 525 million years ago, one of the most important periods in the history of life on Earth, which heralded the first appearance in the fossil record of most of the major animal groups that comprise present-day marine biodiversity.

Professor Derek Siveter at Oxford University’s Department of Earth Sciences and Museum of Natural History formed part of a small team of UK palaeobiologists who extensively researched the Chengjiang fossils together with their discoverer, Professor Hou Xianguang of Yunnan University. The research provided important advances in the knowledge of the evolution of life at the time of the Cambrian explosion, and firmly outlined the critical significance of the Chengjiang fossil record.

Siveter subsequently played a key role in the preservation of this site for future generations. Chengjiang was potentially at risk from the opening of new phosphate mines, but as a result of the research by Siveter and others, the site gained international recognition. This prompted the Chinese government to nominate Chengjiang for UNESCO World Heritage status. Siveter acted as one of three consultants in the preparation of the bid, which proved successful in 2012, giving China its first palaeontologically-based World Heritage site.

Government policy for the Chengjiang area has now shifted away from mining to conservation, education and tourism. Visitor numbers to the area are rising, benefiting the regional economy, and are predicted to reach 40,000 a year. An irreplaceable scientific resource has been maintained for scientists and the public alike to investigate and enjoy.

Research funded by: The Royal Society, the National Natural Foundation of China, Program 973 of China, and the Department of Science and Technology of Yunnan Province

“The Chengjiang Fossil site presents an exceptional record of the rapid diversification of life on Earth during the early Cambrian period… [It] is a globally outstanding example of a major stage in the history of life, representing a palaeobiological window of great significance”