Nature’s designs can be more efficient, elegant and powerful than anything yet built by man. A University of Oxford spin out aims to disrupt vehicle design by taking inspiration from the movement of animals. 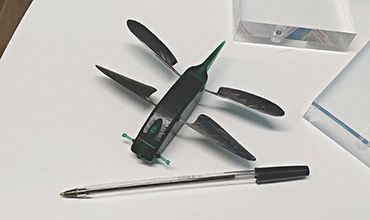 Skeeter drone.
The machines we use to travel by land, sea and air are often very wasteful, generating speed and performance at the expense of burning a lot of fuel. Animals do not have this luxury; the movement systems they have evolved need to be as economical as possible. What if we could apply these lessons to design better vehicles?

Professor Adrian Thomas in the Department of Zoology studies the way animals move: everything from the precise aerodynamics of a dragonfly to the underwater acrobatics of a dolphin. Using high-speed cameras that can take 1000 frames a second, and cutting-edge experimental techniques, he is able to capture and analyse the subtleties of movement that are key to these high-performance animals, the flows and forces they produce, and determine exactly what makes them so successful.

Now Animal Dynamics, a company set up by Professor Thomas and Alex Caccia, is applying some of the fundamental mechanisms underlying animal movement to the design of innovative ‘bio-inspired vehicles’ that will be able to outperform conventional machines.

It has long been known, for example, that propellers waste a lot of energy. There is an urgent need to reduce fuel consumption in the marine shipping sector, which is currently responsible for around 2.5% percent of global greenhouse gas emissions; this figure could more than double by 2050. Propellers are also destructive to fish and other marine life.

Inspired by the fin-powered movement that Professor Thomas has studied in whales and dolphins, the company has designed a ‘flapping fin’ which it estimates could be 20% more efficient than a traditional rotating propeller, as well as much less damaging to wildlife. The shape of the fin matches the natural flow pattern of the water passing over it, rather than disrupting the flow, as a propeller does. As a demonstrator the company has built a human-powered craft called Malolo, after the flying fish, and this is attracting commercial interest. A similar design could be used for marine turbines.

Other work focuses on the development of small unmanned air vehicles (drones) inspired by insect flight, which have received significant funding from the Ministry of Defence via the Defence Science and Technology Labs (Dstl). The Skeeter dragonfly drone has successfully completed a phase 1 proof-of-concept study and is now in a funded phase 2 project (just under £2M) designed to lead to commercialisation.

Animal Dynamics has already received significant investment, turned over half a million pounds in its first year, and will turn over close to £2m in year 2. It is a perfect example of the way in which ‘blue skies’ research can lead to unexpectedly powerful real-world solutions.

Animal Dynamics has already received significant investment, turned over half a million pounds in its first year, and will turn over close to £2m in year 2. It is a perfect example of the way in which ‘blue skies’ research can lead to unexpectedly powerful real-world solutions.

'Underpinned by their detailed understanding of dragonfly flight, the hugely innovative bio-inspired drone technology being developed by Animal Dynamics has the potential to have a real impact on future military operations in complex urban environments.'