East Oxford today is a lively and diverse part of the city, attracting incomers from many countries as well as from all over the UK. In fact, it has always been a place of migration, says Dr David Griffiths, Reader in Archaeology at the University’s Department for Continuing Education, who points to evidence that even in Roman times there were waves of new arrivals settling in the area. 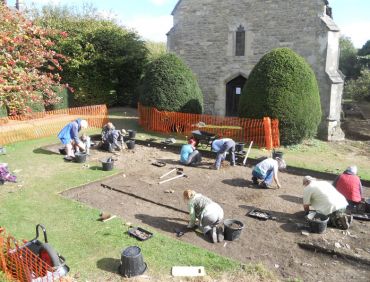 Occasional archaeological investigations of East Oxford over the years have hinted at a rich past encompassing prehistoric sites, Romano-British pottery industries, a medieval hospital, civil war defences and farming. The realisation that a rich landscape lay there ready for new research led Dr Griffiths and archaeology doctoral student Jane Harrison – themselves both East Oxford residents – to come up with a literally ground-breaking idea. In 2010 they launched Archeox, the East Oxford Archaeology and History Project. Their aim is to uncover the past by creating a network of local community volunteers and University staff, passing on to the public the techniques of landscape archaeology while tapping into the enthusiasm and manpower that would enable archaeological investigation to proceed apace.

Alerted by local press coverage, hundreds of volunteers quickly signed up on the Archeox.net website to receive training, support and encouragement as they set about learning new skills. Talks, walks and workshops on topics such as how to excavate, how to clean finds (such as pottery, glass, lead and ironwork), how to identify and report animal bones, surveying a landscape and the basics of geophysics were all – and continue to be – enthusiastically received.

Over a hundred people participated in an excavation of St Bartholomew (‘Bartlemas’) Chapel, just off the Cowley Road, in 2011. To great excitement, volunteers uncovered 13 human skeletons and evidence of leprosy at the site of this medieval hospital, plus evidence of an earlier chapel underneath. In 2012 the team excavated another major medieval site: The ‘Minchery’ or Littlemore Priory, a former nunnery on the eastern outskirts of the city. Another activity is the digging of one metre square ‘test pits’ in locations all over East Oxford to discover what lies beneath. More than 60 such pits have so far been dug, with finds including Romano-British pottery in Blackbird Leys and prehistoric flints in the Iffley Road area. Specific interest groups have also sprung up, focusing for example on place names and the field names associated with 19th century tithe and enclosure maps, and researching local collections in the Ashmolean and Pitt Rivers museums. As well as individual volunteers, Archeox works with community groups such as schools, mental health charities and residents’ associations. Thousands of people have come along to Archeox events or visited its stalls on National Archaeology Day or at the Cowley Carnival.

'As well as all the exciting archaeology and public interest, we’ve made a significant contribution to transforming the perception of Oxford University in East Oxford,’ says Dr Griffiths. ‘People are delighted that the University has come to them in a positive and approachable way – and that they are needed for something the University is doing.’

Funded by: The Heritage Lottery Fund and the University of Oxford John Fell Fund

‘I got involved because I thought I’d like to learn more about local history – I’m interested in anthropology and this is the closest I can get to real field work. I’m interested in archaeology and history as well, and I’m not sure what I want to do for a career, but taking part in this project might be one way of finding out.’

‘I’ve always had an interest in archaeology, thought about doing it at uni, and this seemed like an ideal opportunity, with a whole programme on our doorstep to explore. Next week there will be a radiometry project happening literally 50 yards from my back garden, so it really is about the archaeology of land underneath my feet – things like the Bartlemas excavation and the discovery of the bodies buried there really bring to life the history of the area and its occupation.’