Alarming spread in drug-resistant typhoid may be held back as novel vaccine evaluated by Oxford scientists is rolled out across Asia and Africa. 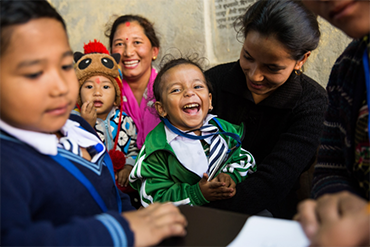 Typhoid has been virtually eliminated in industrialised nations, but in developing countries it is still responsible for an estimated 26 million infections and 200,000 deaths each year. With the spread of antibiotic-resistant strains, these numbers could continue to increase. The disease is transmitted via contaminated food and water, affecting the most vulnerable populations in the world. Providing safe water supplies globally will take decades – which is why Professor Andrew Pollard and his team from the Oxford Vaccine Group (OVG), Department of Paediatrics, set out to prevent typhoid through a different means: vaccination.

OVG developed an innovative controlled human infection model, in which 112 volunteers received either a new typhoid vaccine or a control vaccine, and were then deliberately infected with typhoid. The new vaccine was safe and effective in reducing disease rates by 54-87%.

These data supported the decision by the World Health Organisation to recommend the vaccine for all children aged 9 months to 15 years in regions of the world with a high typhoid burden. Furthermore, the Global Alliance for Vaccines and Immunisation (Gavi) used OVG’s results to inform their decision to release $85 million for rolling out the vaccine to the most vulnerable populations.

Oxford Vaccine Group joined forces with the University of Maryland to test the impact of the new typhoid vaccine in South Asia - and have immunised almost 100,000 children since the trials began in 2017, thus further supporting the widespread implementation of the vaccine.

OVG’s transformational data show that use of the new vaccine has the potential to reduce both the burden of typhoid fever and associated health inequality.

'Not only could this vaccine save lives, it could also prove to be a valuable weapon in the fight against antimicrobial resistance.'