Professor Armin Reichold has turned fundamental research into commercial success: a highly accurate measurement technique initially developed for an academic project has been given a commercial application through Etalon AG, a German spin-out company. 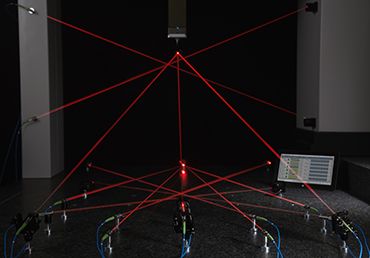 In most everyday situations distances do not need to be measured with great accuracy, but it is a different story when it comes to engineering. High-precision machines and equipment such as particle accelerators simply will not work unless their components are positioned to an incredibly high level of accuracy, often to a few microns (thousandths of a millimetre) in every hundred metres.

As leader of LICAS, an STFC-funded project to help design and build the next generation of linear particle accelerators, Professor Reichold devised an extremely sophisticated laser-based measurement system. It uses Frequency Scanning Interferometry (FSI) technology developed in Oxford, a revolutionary technique which is capable of measuring large absolute distances very accurately, with a tolerated error of only half a micron per meter. This is roughly equivalent to the width of a human hair over a kilometre - an astonishing degree of accuracy over such a distance.

Foreseeing a wide range of potential applications of FSI beyond particle detectors and accelerators, Professor Reichold approached Etalon AG, a German high-tech company, since he was aware they had a potential commercial use for the technology. Etalon manufactures laser tracers to measure distances with extreme accuracy, and the technique that Professor Reichold had developed for particle accelerator construction had the potential to improve their performance significantly.

Through a collaborative research project funded by EPSRC and NPL, Professor Reichold and Etalon worked together to see how the fundamental science could be applied to a commercial problem. The technique was patented by Oxford University Innovation (OUI) and licensed to Etalon, who now manufacture and sell the technology under the brand name Absolute Multiline which can now measure many absolute distances simultaneously.

Thanks to the collaboration, FSI technology is now used in a wide variety of applications beyond physics experiments, such as micro-chip lithography, calibration of computer controlled industrial (CNC) machines, power production plants and material research laboratories. It is also on its way into car production plants, space simulators, air craft manufacturing, national metrology institutes and many other applications.

At the same time, new research projects have emerged which require FSI, including a proposed future linear particle accelerator, the International Linear Collider. As Professor Reichold's research continues, ideas are continuously exchanged to further improve the technology for commercial applications, through Etalon and also through a new industrial collaboration with VadaTech UK.
Professor Reichold's team is currently working on adapting the technology to be able to measure distances to fast-moving targets, which will open up yet another market: control of high-precision CNC machine tools.

Funded by: STFC, EPSRC and NPL

'The Absolute Multiline Technology provides the foundation for machines and structures that are self-monitoring. Therefore, it can become a building block in the future concept of intelligent production.'