An Oxford academic helps bring holy music of the middle ages to life. 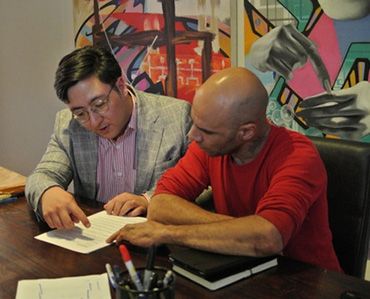 In 2009, staff at the Hawick Heritage Hub – located in the east Southern Uplands of Scotland – made an important discovery. Led by Rachel Hosker, then the Hub’s archive manager, they found what became known as the Hawick Missal Fragment in an uncatalogued collection of family and solicitors’ papers originally belonging to the Rutherford family of Knowesouth, near Jedburgh.

The discovery of the fragment of a Missal – a liturgical book containing the texts and chants used by a priest for Mass – was exciting enough in its own right. Very few survive, the majority having been destroyed in the Reformation.

But better yet, research and analysis of the 800-year-old fragment by Dr Matthew Cheung Salisbury, Lecturer in Music at University College Oxford, has led to medieval music being performed before modern audiences.

“It has been an honour to be involved in the study of the fragment and the interpretation of its music,” says Dr Cheung Salisbury, a medieval musicologist whose research interests include the texts and plainsong found in the extant sources of the medieval liturgy, late medieval ecclesiastical history and digital humanities initiatives. “So few Missals survived Henry VIII’s attempt to destroy them. Those that did were usually hidden or protected.”

Dr Cheung Salisbury has played a key role in the Fragments Project, which, with funding from Creative Scotland and led by Historic Scotland and The Red Field (a community arts group), was set up to reconnect the expressions of the fragment with the modern world. This meant that Dr Cheung Salisbury translated the text of the document from the original Latin, before transcribing the music into modern notation.

The chant, and the buildings in which it was originally sung, have been brought to life. Dr Cheung Salisbury also helped tackle a challenge that 21st century musicians might find daunting: “Plainsong doesn’t have any rhythm,” he explains. “This contributes to a belief that medieval music is impenetrable. However, by performing it in the kinds of venue that would originally have seen performances – places like Jedburgh Abbey and Kelso Abbey – we’ve shown that the music is both accessible and enchanting. The fragment is ‘monophonic’, that is, it consists of a single melody sung in unison by all, but when sung in places with wonderful echo and reverb the sound is haunting and meditative.”

The first recording of the music of the fragment was made at the chapel of Worcester College, Oxford University. The Fragments Project has since seen a number of performances, with Dr Cheung Salisbury’s research providing the impetus for new compositions by Sean Doherty, Michael Nyman and Grayston Ives. Then, on 30 August, came the most modern interpretation of the music of the Hawick Missal Fragment yet: DJ and electronic artist Goldie’s concert at Glasgow Cathedral on 30 August.

For Dr Cheung Salisbury, Goldie’s concert was the highlight of the Fragments Project: “One of the most exciting aspects of the Project was producing an acoustic, live performance of a piece which Goldie composed entirely electronically and which we then orchestrated for an ensemble, crossing borders between the recorded and the live. We are building bridges between contemporary electronic music and the concert hall – through the medium of medieval chant.”

’To see and hear the piece evolve and then be re-notated and scored for orchestra and choir by Dr Salisbury is simply immense and makes the hairs on my arm stand up. It’s probably one of the most emotional and powerful pieces of music I have ever written.‘