An Oxford University project is exploring what land means to the people and communities who own, occupy, or live from it – as a way to strengthen environmental sustainability and social justice. 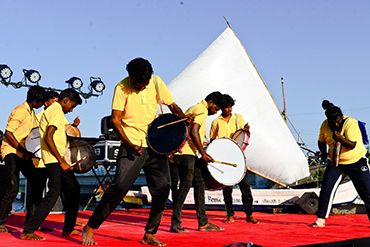 Live performance at the Festival of the Commons in Tamil Nadu

“We tend to think of land conflicts as clashes between those who want to develop land commercially and those who want to conserve nature in its pristine state,” says Dr Nikita Sud. “But land means so much more than this to the people and communities who own, occupy or live from it.”

The Many Lives of Land grew out of Dr Sud’s research into India’s rapidly changing landscape. The project brought together land rights activists, grassroots journalists, filmmakers, musicians, poets and artists, with researchers from Oxford and universities in the US, Europe and Asia. Two workshops allowed participants to share histories, experiences and ideas with each other, which gave rise to a huge number of creative collaborations over the two-year project (2018-20).

A three-day Festival of the Commons in Tamil Nadu celebrated the connection of fishworkers, boatbuilders, pickle makers and others to the coastline, challenging the idea that the area is unproductive. Short films explored the Dalit caste struggles for land and rights, while a land rights organisation developed their analysis for a major policy report through involvement in the project. In all, Many Lives reached over 75,000 people through different mediums.

“The project clearly demonstrated how intertwined people’s everyday existence is with land,” says Sud. “We worked with women for whom the small parcels of land they had been able to buy represented security, dignity and empowerment after leaving oppressive relationships. And with a fisherman who had learnt to make maps in order to show that mangrove areas are not empty wasteland to be developed but productive waters supporting essential livelihoods.”

“People described land variously as their link with ancestors, their identity, their history, their home, their memory. Clearly land is far more than its commercial value and can’t be compensated just in monetary terms.”

So why does exploring and capturing this matter? “Over the period of market liberalisation starting in 1991, more than five million hectares of land in India have transitioned from small-scale agriculture and common property uses to industry, infrastructure, mining and real estate,” explains Sud. “These changes are linked to the worsening climate crisis in South Asia. Having a deeper understanding of our relationship with land will enable us to make better decisions about how it’s used.”

By working with Dalit journalists and filmmakers, and indigenous women and men, the project was able to ensure the voices of these groups were amplified in public debates about land-use. The legacy of the project can now be seen in the connections forged between participants from all over India who are still working together, and the increased confidence and legitimacy of their land advocacy work.

Many Lives of Land has also influenced Sud’s own research. “The beauty of Many Lives was that the grant did not require specific outputs to specific deadlines,” explains Sud. “That allowed us to play with ideas and explore, which was really creative and productive.”

“Now we have rich new insights to feed into our research, and a new model for exploring serious conceptual questions in a collaborative and democratic way. Material from the project has also fed into the first course on climate change and development being piloted by the Oxford Department of International Development in early 2021, and it has deepened my own research interest in human-nature interactions in the era of climate change.”

"Working with Dr Nikita Sud and the Many Lives of Land project helped Land Conflict Watch to develop and strengthen our policy paper Locating the Breach, and gave us ideas for how to take the research and advocacy forward in the future.”

"Working with Dr Nikita Sud and Many Lives of Land was a window of opportunity for artists like me to voice out the stories of land abuse through mining in Meghalaya, which otherwise don’t get captured in the areas of arts and cultural studies."

Rida Gatphoh, lead singer of the band Rida and The Musical Folks, based in Meghalaya, North East India